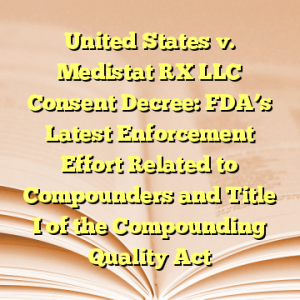 By Karla L. Palmer & Sara W. Koblitz –
In the almost four years since passage of Title I of the Drug Quality Security Act, (the Compounding Quality Act), FDA has inspected hundreds of pharmacies, issued numerous Form 483s and warning letters, and has requested both voluntary recalls and cessation of non-sterile and sterile operations.  It has similarly inspected outsourcing facilities, and issued Form 483s and warning letters, and requested recalls and voluntary cessation of operations.  The substantial majority (if not all) of FDA’s actions are set forth on FDA’s compounding or outsourcing facility pages on its website (here and here).
As FDA’s web pages reveal, on only a very few occasions (i.e., three) has FDA through the Department of Justice entered into a consent decree of permanent injunction or initiated a criminal action (i.e., four) with an offending compounding pharmacy. Based on a review of those few consent decrees and criminal matters, it seems that a key reason for the consent decree or criminal action is FDA’s finding of product contamination (i.e., mold found in the sterile injectable product) or complaints of illness directly related to use of the compounded preparations.
On July 5, 2017, the United States Department of Justice announced it entered into a consent decree of permanent injunction with now closed Alabama outsourcing facility Medistat RX LLC, its owners (chief executive officer), production manager, and pharmacist in charge/quality manager. The consent decree prohibits them for a period of at least five years from “manufacturing, holding or distributing drugs until they comply with the Federal Food, Drug and Cosmetic Act (FD&C Act) and its regulations, in addition to other requirements.”
The government’s action comes, in part, as a result of an inspection that occurred almost two years ago – in August and September 2015- following an earlier 2014 inspection where FDA claims that, notwithstanding promises to do so, the facility did not correct earlier observations. In addition, DOJ’s press release states that, in 2015, the Rhode Island Department of Health notified the Agency about a Staphylococcus aureus infection outbreak that was potentially linked to betamethasone manufactured by Medistat.  Thus, FDA’s 2015 follow-up inspection also revealed, after a review of Medistat’s own documents, that the facility itself had previously identified several types of microorganisms in the air and on surfaces used for sterile compounding.
The May 2017 complaint filed in the United States District Court for the Middle District of Alabama, claims among other things that, upon identifying the microbial contamination, defendants failed to “adequately investigate or take sufficient corrective action to alleviate insanitary conditions that resulted in the contamination in the sterile areas of the facility.” DOJ Press Release dated July 5, 2017.  Thus, notwithstanding the facility’s agreement to recall products, voluntarily cease all  compounding operations, and ultimately, not to renew its outsourcing facility registration, FDA took the additional step of filing a federal complaint and ultimately entering into the consent decree.
A final note: By our count based on public information in FDA’s website, the consent decrees involving compounding present a common enforcement theme: Each involve allegations of illness or visible contamination derived from compounded products prepared by the pharmacies. With respect to Medistat, FDA found evidence of environmental contamination at the facility as recorded in the facility’s own records, and Medistat’s compounded products allegedly made people sick. This scenario presents a cautionary tale for pharmacies and outsourcing facilities.  Medistat obtained a pharmacy license in 2007 and then obtained an outsourcing facility registration in November 2014, a year after enactment of Title I of the DQSA (the statute which created such facilities).  The conversion from a traditional compounding pharmacy to an outsourcing facility remains fraught with significant legal and regulatory hurdles, and both FDA and states are paying close attention.