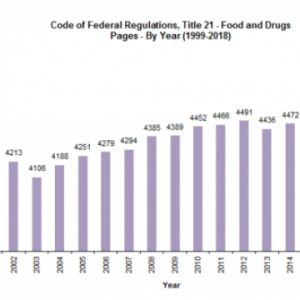 Well, here we are in Fall 2018, a little more than 6 years after our original “waistline” post, and the world has changed a lot (according to BuzzFeed at least).   Practicing food and drug law – and just keeping track of FDA’s day-to-day actions – has become more difficult and complicated.  (But that’s what keeps things fresh and exciting for us!)  So when we pulled up a copy of the most recent version of the FDC Act published by the House of Representatives (as amended through Public Law No. 115-234, enacted on August 14, 2018), and realized that the statute was once again changed with the President’s recent enactment of the “Substance Use–Disorder Prevention that Promotes Opioid Recovery and Treatment for Patients and Communities Act” (“SUPPORT for Patients and Communities Act”), we decided to revisit and update our old “waistline” post numbers.

With all of the legislation enacted over the past 6 years and with the number of rules promulgated by FDA (and notwithstanding the Trump Administration’s so-called “2-for-1” Executive Order), we knew before our reassessment that there would be growth in both the CFR and the FDC Act. But by how much remained to be answered. We noted back in 2012 that “our study shows that although there has been significant growth in the FDC Act, the CFR, which implements the law, has not kept up,” and that there’s “a theory for this seemingly odd result: FDA has been issuing far fewer regulations, and instead, has been implementing the law through guidance and other policy documents.” That’s still true today; however, there’s a twist.