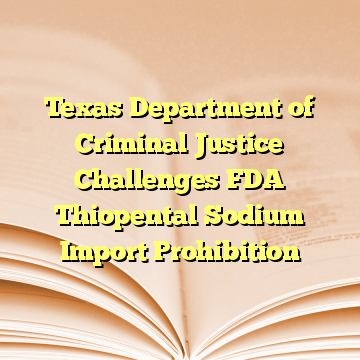 By Kurt R. Karst –
Last week, the Texas Department of Criminal Justice (“TDCJ”) filed an Amended Complaint in a case initially filed against FDA in January 2017 in the U.S. District Court for the Southern District of Texas. TDCJ initially challenged FDA’s delay in determining the admissibility, into domestic commerce, of an import shipment of the drug thiopental sodium for purposes of carrying out capital sentences through lethal injection. TDCJ’s Amended Complaint follows a 26-page April 20, 2017 decision and an April 21, 2017 Notice of Refusal from FDA’s Southwest Import District Office in which the Agency concluded that the detained thiopental sodium drug appears to be an unapproved new drug and misbranded under FDC Act § 502(f)(1) and § 505(a).
As readers of this blog might recall, in March 2012, the U.S. District Court for the District of Columbia granted a Motion for Summary Judgment filed on behalf of a group of death row inmates challenging FDA’s release of imported thiopental sodium for use as an anesthetic as part of lethal injection (see our previous post here).  Later, the district court issued an order permanently enjoining FDA from “permitting the entry of, or releasing any future shipments of, foreign manufactured thiopental that appears to be misbranded or in voplation of [FDC Act § 505 as an unapproved new drug.]”  In July 2013, a 3-judge panel from the U.S. Court of Appeals for the District of Columbia Circuit unanimously and largely affirmed the DC District Court’s March 2012 decision (see our previous post here).  See Beaty v. FDA, 853 F. Supp. 2d 30 (D.D.C. 2012), aff’d in part, rev’d in part sum nom Cook v. FDA, 733 F.3d 1 (D.C. Cir. 2013 (“Beaty/Cook”).
Fast-forward to FDA’s April 2017 decision, in which the Agency concludes:

FDA is bound by the terms of the order issued by the District Court in [Beaty/Cook].  That order requires the Agency to refuse admission to import entries of foreign-manufactured sodium thiopental if the sodium thiopental appears to be an unapproved new drug or a misbranded drug. . . .  [W]e disagree with [the] contention that FDA has room to exercise discretion regarding the foreign-manufactured sodium thiopental [redacted] wishes to import. . . .
Based on a review of the entire record in this matter . . . . we have concluded that the detained drugs . . . appear to be unapproved new drugs and misbranded drugs. . . .

Much of the remainder of FDA’s April 20, 2017 memorandum decision details the Agency’s basis for concluding that the subject thiopental sodium is an unapproved new drug (because, among other things, statements on the label of the detained thiopental sodium suggest its use for lethal injection and the drug is nort generally recognized as safe and effective for use as part of a lethal injection), and that the drug is misbranded under FDC Act § 502(f)(1) and § 505(a) (because the drug does not bear adequate directions for use as required by FDC Act § 502(f)(1)).
TDCJ addresses each of the issues above in its April 26, 2017 Amended Complaint (at least to the extent permitted in a Complaint), and requests that the court set aside FDA’s prohibitory actions, declare that they are unlawful, and enjoin FDA from imposing similar import prohibitions in the future.
“The refused thiopental sodium may be lawfully admitted into domestic commerce without prior FDA approval,” says TDJC, because such drugs are not “new drugs” within the meaning of FDC Act § 201(p) in that the labeling that does not prescribe, recommend, or suggest any conditions of use for the drugs.
TDJC also says that “[t]he statutory and regulatory requirements that FDA invokes to support its prohibitory actions do not apply in this law enforcement context.” “An FDA ‘law enforcement’ exemption precludes application of one of the requirements at issue.  And the remaining requirements also do not apply, among other things because the drugs have labeling that does not prescribe, recommend, or suggest any patient treatment use.”
The “law enforcement” exception relied on by TDCJ is at 21 C.F.R. § 201.125 and exempts a drug from having “adequate directions for use.” Specifically, the regulation provides that:

A drug subject to [21 C.F.R. §§] 201.100 or 201.105, shall be exempt from [FDC Act §] 502(f)(1) of the act if shipped or sold to, or in the possession of, persons regularly and lawfully engaged in instruction in pharmacy, chemistry, or medicine not involving clinical use, or engaged in law enforcement, or in research not involving clinical use, or in chemical analysis, or physical testing, and is to be used only for such instruction, law enforcement, research, analysis, or testing.”  [(Emphasis added)]

“In this case, the drugs at issue fall within the exemption that applies to drugs ‘shipped or sold to . . . persons . . . engaged in law enforcement, . . . and [are] to be used only for such . . . law enforcement,’ says TDCJ.  Moreover, says TDCJ, although the statute, at FDC Act § 502(f)(1), requires certain warnings to protect patients, “[i]n this case, no labeling warnings are necessary to protect patients, among other things because the drugs at issue will not be used for patient treatment.”
TDCJ’s three-count Amended Complaint alleges FDA violations of the Administrative Procedure Act and FDC Act § 505(a), FDC Act § 801(a), and FDC Act § 502(f)(1) stemming from FDA’s import refusal order and import ban.