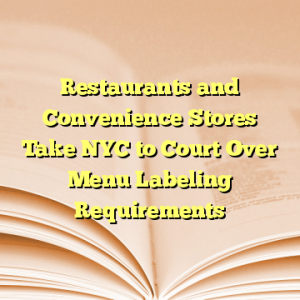 By Etan J. Yeshua –
With headlines focused on the Affordable Care Act (ACA) and the rapidly unfolding drama surrounding the repeal and replace efforts, one aspect of the ACA that could easily fly under the radar has been the subject of its own ongoing legal battles: menu labeling. To borrow a phrase from one recent political commentator, “It’s an unbelievably complex subject” that “nobody knew . . . could be so complicated.”
So where are we exactly with menu labeling? Here’s a brief recap of the last seven years: when the Affordable Care Act was enacted in 2010, it added to the Federal Food, Drug, and Cosmetic Act (FDC Act) calorie posting and other menu labeling requirements for chain restaurants and similar retail food establishments. FDA issued final regulations to implement those requirements in 2014. Enforcement was delayed – first by FDA at the request of industry, then by Congress – and eventually FDA established May 5, 2017 as the deadline for compliance. But on May 4, in an eleventh hour twist, FDA extended the compliance date to May 2018 to give the Agency time to reconsider certain aspects of and ambiguities in the rule. In response, two consumer advocacy groups sued FDA in an attempt to bring about a more immediate compliance date. That litigation is ongoing. In addition, just two weeks after FDA announced the extension, New York City announced that it would begin enforcing its own menu labeling requirements on May 22, 2017, with fines and notices of violation beginning on August 21, 2017.
Now, trade associations that represent convenience stores, grocery stores, and restaurants are asking a federal court to stop the City of New York from enforcing its menu labeling regulations. In a Complaint and Motion for Preliminary Injunction filed on July 14 in the U.S. District Court for the Southern District of New York, the National Association of Convenience Stores, New York Association of Convenience Stores, Food Marketing Institute, and the National Restaurant Association’s Restaurant Law Center argue that the City’s enforcement of menu labeling requirements before FDA’s May 2018 compliance date violates federal law.
The plaintiffs argue that the City is expressly and impliedly preempted from enforcing its menu labeling regulations on establishments subject to the federal requirements until FDA’s compliance date. The FDC Act expressly preempts states and localities from enforcing non-identical menu labeling requirements on establishments that are subject to the federal requirements (i.e., establishments with 20 or more locations or that voluntarily comply with the federal requirements): “[N]o State or political subdivision of a State may directly or indirectly establish under any authority or continue in effect . . . any requirement for nutrition labeling of food that is not identical to” the federal statutory menu labeling requirements. FDC Act § 403A(a)(4). New York City has said that its requirements are “identical to the federal requirements.” The plaintiffs assert that though the City may have intended for the substantive requirements of its regulations to be identical to the federal requirements, “requiring compliance a year in advance of the federal requirements” is an additional, non-identical obligation. (In addition, whereas the federal requirements apply to chains with 20 or more locations in the United States, the City’s requirements apply to chains with 15 or more.)
In support of their preemption argument, the plaintiffs cite a string of recent cases in which U.S. District Courts in California rejected consumer plaintiffs’ attempts to seek immediate enforcement – under California State law – of FDA’s requirement that food companies remove partially hydrogenated oils from their products by 2018. “Following the reasoning of these cases,” the plaintiffs argue, “the immediate enforcement of [New York City’s menu labeling rules] would greatly disrupt the FDA’s carefully considered compliance date of May 2018 by requiring immediate compliance with the federal standard in New York City.”
Absent an injunction, convenience stores, restaurants, and other covered establishments will face a risk of irreparable harm in at least two ways, according to the complaint: “(i) they face enormous and ultimately unrecoverable costs to comply with a regulatory regime now that is likely to change by May 2018, and (ii) they face fines, business disruptions and other harms from having to comply with regulatory rules that are so unworkable that the FDA saw fit to delay their implementation.”