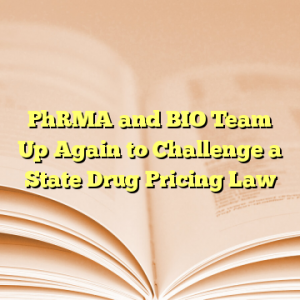 By David C. Gibbons & Alan M. Kirschenbaum –
On September 1, 2017, two industry trade associations, Pharmaceutical Research and Manufacturers of America (“PhRMA”) and Biotechnology Innovation Organization (“BIO”), jointly filed a civil action seeking declaratory and injunctive relief against the Nevada Governor and Director of the Nevada Department of Health and Human Services (“NDHHS”) to prevent enforcement of a recent Nevada law aimed at containing drug prices, S.B. 539, which was enacted on June 15, 2017.  In summary, S.B. 539 places new reporting requirements on pharmaceutical manufacturers and pharmacy benefit managers related to diabetes treatments and health care provider payments.  Patient advocacy groups are also required to report certain payments from pharmaceutical manufacturers, PBMs, and other third parties.  (See our previous blog post on S.B. 539 here).  The Complaint, filed in the United States District Court for the District of Nevada, seeks a declaratory judgment that S.B. 539 is unconstitutional and, thereby, void, as well as a permanent injunction barring implementation or enforcement of the bill.  Compl. at 43, PhRMA v. Sandoval, No. 2:17-cv-02315 (D. Nev. Sep. 1, 2017).
PhRMA and BIO advance four arguments in their Complaint as to why S.B. 539 is unconstitutional. First, PhRMA and BIO argue that S.B. 539 is preempted by federal patent law because S.B. 539 “impermissibly burdens” manufacturers’ patent rights by coercing manufacturers to cap prices on certain diabetes drugs, thus interfering with their right to set prices in accord with the economic incentives provided under federal patent law. Id. at 25-27, 40.  Pursuant to S.B. 539, manufacturers of prescription drugs determined by NDHHS to be “essential for treating diabetes” in Nevada are required to make annual disclosures regarding costs, expenses, profits, rebates, financial assistance data as well as the wholesale acquisition cost (“WAC”) related to such products, which PhRMA and BIO argue are trade secrets (see discussion below).  Manufacturers can avoid disclosing such trade secrets by ensuring the WAC for these certain diabetes drugs does not increase by a percentage equal to or greater than the Consumer Price Index, Medical Care Component (“CPI Medical”) during the preceding calendar year or twice the CPI Medical during the preceding two years.  Thus, under S.B. 539, manufacturers must choose how to forego their rights under federal patent law by either disclosing trade secrets or restraining price increases on their products.  The argument that such a law is preempted by federal patent law was successfully advanced by PhRMA and BIO previously, in a lawsuit challenging a District of Columbia statute prohibiting excessive drug pricing of patented drugs.  In that case, the United States Court of Appeals for the Federal Circuit held, that:

By penalizing high prices — and thus limiting the full exercise of the exclusionary power that derives from a patent — the [government] has chosen to re-balance the statutory framework of rewards and incentives insofar as it relates to inventive new drugs. . . . The Act is a clear attempt to restrain those excessive prices, in effect diminishing the reward to patentees in order to provide greater benefit to . . . drug consumers. This may be a worthy undertaking on the part of the . . . government, but it is contrary to the goals established by Congress in the patent laws.

BIO v. District of Columbia, 496 F.3d 1362, 1374 (Fed. Cir. 2007).
Second, PhRMA and BIO argue that S.B. 539 is preempted by the Defend Trade Secrets Act, Pub. L. No. 114-153, 130 Stat. 376 (2016) (codified at 18 U.S.C. § 1836(b)) (“DTSA”), because it compels the disclosure of trade secrets related to products in interstate commerce.  Compl. at 31, 41.  In addition, S.B. 539 expressly amends the Nevada trade secret statute by eliminating trade secret protection for the information required to be reported to NDHHS under the new law.  As described above, manufacturers must disclose confidential information to NDHHS regarding the pricing, rebates, and other financial details for essential diabetes products.  NDHHS must also make such information publicly available pursuant to S.B. 539.  A number of courts have held that confidential information, such as “advertising, cost, marketing, pricing, and production” information, constitutes a trade secret. See id. at 31.  S.B. 539 conflicts with federal trade secret law by “alter[ing] the operation of the DTSA” with its express elimination of trade secret protection for confidential pricing and other financial information — information that Congress sought to protect under the DTSA, according to PhRMA and BIO.
The third argument advanced by PhRMA and BIO is that S.B. 539 violates the Fifth Amendment Takings Clause because it amounts to an uncompensated, and thereby unconstitutional, taking of trade secrets from certain diabetes drug manufacturers. PhRMA and BIO argue that S.B. 539 is a categorical taking of a property interest—the right to exclude others—in intangible property, namely the statutorily-created patents for innovative drugs.  In their Complaint, PhRMA and BIO argue that “under any Takings analysis, S.B. 539’s disclosure requirements destroy valuable trade secrets related to diabetes drugs without any compensation, let alone just compensation, in violation of the Takings Clause.” Id. at 36.
Finally, PhRMA and BIO contend that S.B. 539 violates the Commerce Clause by directly regulating interstate commerce. The Commerce Clause empowers Congress to regulate commerce “among the several states,” and thereby prohibits states from discriminating against or unduly burdening interstate commerce.  U.S. Const. art. I, § 8, cl. 3; see, e.g., Philadelphia v. New Jersey, 437 U.S. 617, 623-624 (1978).  PhRMA and BIO argue that the “extraterritorial effects of S.B. 539 are substantial and unavoidable because the market for diabetes drugs—especially ‘essential’ diabetes drugs—is inherently national.”  Compl. at 37.  PhRMA and BIO describe three ways in which S.B. 539 violates the Commerce Clause.  To begin with, it directly affects trade secrets belonging to companies whose operations are entirely outside of Nevada.  According to PhRMA and BIO, by eliminating trade secret protection for the confidential pricing and financial information required to be reported to and publicly disclosed by NDHHS, S.B. 539 disrupts manufacturers’ ability to protect such trade secrets in every other state and impacts the “economic success” of such manufacturers as well.  In addition, PhRMA and BIO highlight the fact that WAC is a “national list price,” and restraints on WAC by one state will affect the diabetes drug prices associated with manufacturers’ transactions carried out wholly outside of Nevada.  This is similar to the Commerce Clause arguments advanced in other litigation against state drug pricing transparency laws, such as the lawsuit against Maryland brought by the Association for Accessible Medicines (“AAM”), the generic drug trade association, which we blogged on recently (here). See Compl. at 2, 23-27, Ass’n for Accessible Meds. v. Frosh, No. 1:17-cv-1860 (D. Md. July 6, 2017).  Moreover, PhRMA and BIO argue that disclosure of otherwise confidential pricing information could have anti-competitive effects on drug pricing.  PhRMA and BIO relate certain opinions by the Congressional Budget Office and the Federal Trade Commission indicating that “tacit collusion” among pharmaceutical manufacturers can arise from “compelled disclosure of drug pricing information, specifically rebates . . . .”  These government agencies postulate that lack of secrecy could result in inflated prices for drugs.
We will continue to monitor this and similar lawsuits against states that have enacted drug pricing laws aimed at curbing drug price increases.