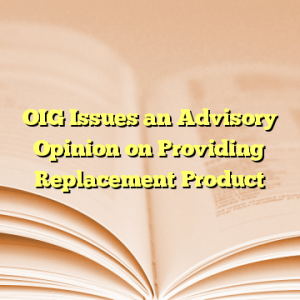 By Serra J. Schlanger & Jeffrey N. Wasserstein –
In an advisory opinion posted on August 25, 2017, the Office of the Inspector General of the Department of Health and Human Services (“OIG”) determined that enforcement action would not be taken against a drug manufacturer’s proposal to replace products that require specialized handling that could not be administered to patients for certain reasons, at no additional charge to the purchaser.
Advisory Opinion 17-3 was requested by a company that manufactures and sells biologics and other products that may be sensitive to temperature changes, direct sunlight or movement, or may require reconstitution in a controlled environment. The labeling for the company’s products includes specific storage and handling requirements, and, if applicable, limits on the amount of time that may pass between when a product is reconstituted and when it is administered to a patient. Failure to meet these requirements results in product spoilage.
Under the proposed program, the manufacturer would replace, without charge, products purchased by physicians, clinics, and hospitals if the products became spoiled or otherwise unusable after purchase. Under the program, products could only qualify for replacement if it was not administered to a patient after having been rendered unusable due to:

Being mishandled, dropped, or broken;
Being inappropriately stored or refrigerated, or frozen;
An admixture error; or
Being reconstituted but not administered due to an unforeseen patient condition or missed appointment.

Purchasers would be informed about the program and policies for replacement before purchase. The program would only allow for the replacement of spoiled products and would not provide purchasers with credit for any spoiled product or replacements for free samples. In addition, a purchaser could not receive replacement product if the spoiled product had been administered or billed to an insurer or patient. The program was designed to replace single spoilage claims; however, in the event of a multi-unit loss (e.g., a refrigeration failure), the purchaser could claim a loss of up to five products. In order to receive the replacement product, the purchaser would be required to submit documentation describing how the spoilage occurred and return the spoiled product. In the event that the product could not be returned (e.g., a broken vial), the purchaser must attest to how it became unusable and provide a photograph of the spoiled product, if available. The purchaser would also be required to sign an acknowledgement that neither a patient nor insurer was billed for the spoiled product.
In analyzing this program under the Federal anti-kickback statute (“AKS”, 42 U.S. C. § 1320a-7b(b)), the OIG recognized that, although potentially applicable, the safe harbor for warranties (42 C.F.R. § 1001.952(g)) would not protect the proposed replacement product program because the safe harbor for warranties protects actions taken by suppliers to address products that do not meet specification. In the proposed program, the products intended to be replaced would meet specification but would then be spoiled or rendered unusable after they had been delivered to the purchaser due to the purchaser’s error or an unforeseen inability to administer the product after it was prepared for a patient.
Nevertheless, the OIG concluded that the proposed replacement product program presented a low risk of fraud and abuse for four reasons.

The replacement of product would be restricted to certain unintentional unplanned circumstances and could increase patient safety and quality of care (e.g., by decreasing the possibility that a purchaser would administer potentially spoiled product in order to avoid financial loss).
There was low risk of increased cost or overutilization because the program would only apply to products that the purchaser had already selected and intended to use, but did not administer to a patient or bill to a patient or insurer.
The program would only cover individual claims of spoiled products and not large losses. In addition, the only remedy would be replacement of the same product that the purchaser had intended to use.
The program is similar to an insurance program, which OIG believes is unlikely to cause a purchaser to its change behavior (e.g., the purchaser would be unlikely to reduce costs that are currently expended to prevent spoilage). In addition, the fact that the purchaser would be required to complete an administrative process, including providing proof or an attestation of the spoilage and returning the product or explaining why it cannot be returned, reduces the risk that the program would unduly influence the purchase of products.

It is encouraging that OIG has recognized that such a program has a public health benefit and low risk of fraud and abuse.