Is The 510(k) Process As Worthless As The Federal Courts Seem to Believe? 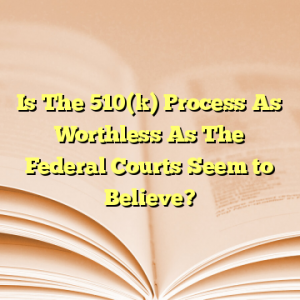 By Jeffrey K. Shapiro –
Does the Food and Drug Administration’s review of medical devices in the 510(k) program involve a substantial review of safety and effectiveness? FDA says it does (p. 44). Device makers and those of us who practice in this area know how burdensome and extensive this process can be. It requires device makers to provide extensive preclinical safety and effectiveness data for FDA’s review. Depending upon the type of device, FDA may also require clinical data. We wrote a Food and Drug Law Journal (FDLJ) article in 2014 describing the evolution of the 510(k) program and its current‑day rigor.
Nonetheless, the federal courts continue to view the 510(k) process as a nothing‑burger. The latest example comes in a case against Johnson & Johnson (J&J) involving the TVT‑O pelvic mesh. The trial court refused to allow the defendants to present any FDA‑related evidence, including the fact that this device received 510(k) clearance. The trial court insisted that the 510(k) review did not address the safety of the TVT‑O pelvic mesh. On appeal from a $3.3 million dollar jury verdict, the Fourth Circuit affirmed. A petition for certiorari has been filed in the Supreme Court. Friend of the court briefs were filed by the Advanced Medical Technology Association (Advamed) and Product Liability Advisory Council (PLAC). (Full disclosure: The petition for certiorari and the amicus briefs all cite and quote our FDLJ article.)
What is the origin of the trial court’s view of the 510(k) process? In Medtronic v. Lohr, 518 U.S. 470, 479 (1996), the Supreme Court described 510(k) equivalence review as very limited. In that case, the Court was reviewing a products liability claim against a medical device cleared in 1982. The basic problem is that the lower courts have overlooked the changes to the 510(k) program. The 510(k) program as a temporary grandfathering provision, but over the decades became the dominant regulatory pathway to market for medical devices.
The changes to the 510(k) program include both an important statutory change in 1990, as well as extensive administrative changes over the past few decades. The Supreme Court’s view of the 510(k) process in 1982 was accurate at the time, but it is obsolete today. There is no question that, as both a legal and as a factual matter, the 510(k) process includes a review of safety and effectiveness. It is simply error for the lower courts to deny it. (We wrote a blog post on this topic in 2015.)
Still, the federal courts continue as if the 510(k) program has not changed since 1982. Every year they recycle the same mischaracterizations of the 510(k) process. There seems to be no end in sight, unless perhaps the Supreme Court accepts the TVT‑O case (or another similar case) for review. The Court could then use the opportunity to steer the lower courts to a proper understanding of the 510(k) review process and the role it should play in court cases. It is unfair to the defendant when, as in the TVT‑O case, a judge excludes obviously relevant evidence based upon a severe misunderstanding of the government’s own regulatory process. The time is long past due for the Supreme Court to fix this problem.