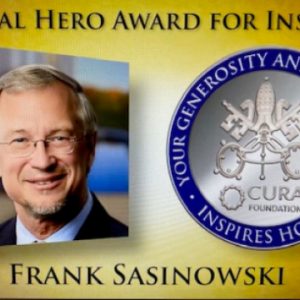 Hyman, Phelps & McNamara, P.C., is proud to announce that Frank J. Sasinowski, a Director at the firm, this past Saturday was awarded by Pope Francis the “2021 Pontifical Hero Award for Inspiration” for his “unwavering advocacy for those who live with rare diseases.” The award (see below) was announced during last week’s 3-day virtual conference that featured more than 100 speakers, ranging from Dr. Tony Fauci & Dr. Francis Collins to an audience with Pope Francis. The conference also included a session on “Developing Drugs for Rare Diseases” that featured a colloquy between CBER Director Peter Marks and Frank. The 2021 Pontifical Hero Awards are conferred by the Vatican’s Pontifical Council for Culture and the Cura Foundation to individuals who have inspired hope through their generosity, compassion, wisdom, and leadership.

In the video accompanying this presentation, the Vatican stated: “Frank Sasinowski has assisted in the approval of hundreds of new drugs, including those that address rare and serious conditions that don’t often garner worldwide attention. He distinguishes himself by recognizing that a disease need not be common to be debilitating and that the value of even just one life saved is incomparable. As Frank says: ‘My spiritual work and my work in medicine are all one, it is seamless and it is my ministry.“