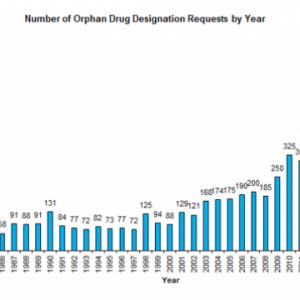 Below are three tables – one for each metric we track – showing the year-by-year numbers since 1983. The numbers are largely based on information from FDA’s Orphan Drug Designations and Approvals Database. New efforts FDA announced this week could mean that new records will be set in 2018. Those new efforts include a pilot program for more efficient orphan designation requests.  The components of the pilot program include a fillable form intended to make the designation process easier for sponsors and more efficient for FDA to review, an on-line tutorial to guide sponsors through the submission process, and a new inter-center consult process to streamline and standardize the Agency’s communications process.