GMO Labeling And The ANPRM That Wasn’t 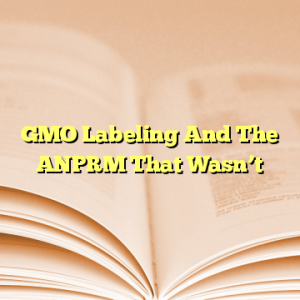 By Ricardo Carvajal –
Earlier this week, USDA/AMS posted “Proposed Rule Questions Under Consideration” on its web page dedicated to the establishment of a National Bioengineered Food Disclosure Standard.  The posting asks for comment on 30 questions relating to different aspects of what such a standard might entail.  Most of the questions will doubtless be of great interest to industry and consumer advocates, and can be expected to generate a significant volume of comments.  For example, AMS asks for input on allowable terminology; types of modifications that should be exempt from disclosure; what the threshold for disclosure should be; how disclosures should be made for bulk, vending machine, and online purchases; how AMS should define very small or small packages for purposes of special provisions on disclosure; how AMS should define which retail food establishments are “similar” to restaurants; and what types of records should be required for compliance purposes.
AMS’s latest move is also interesting from a procedural standpoint.  At least some of the questions in the web posting may have originally been included in an Advanced Notice of Proposed Rulemaking (ANPRM) that was submitted to OMB/OIRA for regulatory review on January 18, 2017 – only to be withdrawn less than a week later, a few days after the presidential inauguration.   At that point, the rulemaking was already running behind the schedule that had been forecast in the unified agenda, which called for the ANPRM to be issued in November 2016.  Given that a proposed rule was forecast to be issued in November 2017, the recent web posting appears to be an effort to obtain the type of input that would otherwise have been obtained through the ANPRM – but without the associated delay.  Indeed, the posting states that “USDA will use this input in drafting a proposed rule.”  Because the web posting asks that comments be submitted to the agency via email, it’s not clear how or when those comments will be made accessible to the public.  In any case, an email notification of the posting states that “feedback related to the questions should be submitted to GMOlabeling@ams.usda.gov by July 17, 2017.”