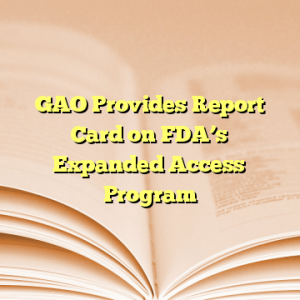 By James E. Valentine & Josephine M. Torrente –
On July 11, 2017, the Government Accountability Office (GAO) provided Congress with an assessment report on FDA’s Expanded Access (“EA”) program. EA programs allow patients with serious or life-threatening diseases and no satisfactory therapy available to access investigational drugs outside of a clinical trial (report available here). Among other things, GAO was asked to examine the following:

What is known about the number, type, and time frames of EA requests received by FDA;
What actions FDA and other stakeholders have taken to improve EA; and
How FDA uses data from EA in the drug approval process.

As part of its investigation, GAO reviewed FDA’s regulations, audited FDA documents, and analyzed FDA data on EA requests from FY2012 through 2015. GAO also interviewed FDA officials and other stakeholders, including nine manufacturers, as well as patient and physician representatives.
FDA’s Improvements and Successes
GAO found the following improvements and successes with regard to FDA facilitating access under its EA program:
Simplifying EA Requests

FDA published a simplified website, guidance, and form required for the most common types of EA requests;
FDA asked the Reagan-Udall Foundation to develop a web-based Expanded Access Navigator to help physicians and patients find relevant information about the process, including a directory of manufacturer’s EA policies; and
FDA is assisting WCG Foundation in developing a project to streamline the IRB process and educate IRBs in single-patient IND situations.

Efficient Review of EA Requests Received
Of the nearly 5,800 EA requests that were submitted to FDA in FY 2012-2015 (96% of which were for single patients), the Agency allowed 99% to proceed. FDA typically responded to emergency single-patient requests within hours, and all other requests were considered within the allotted 30 days under its regulations (see table below).

Room for Improvement in the EA Program
While FDA grants requests for EA, the patient must first receive permission to access the investigational drug from the manufacturer. Despite FDA’s achievements, GAO found a remaining barrier to access: industry’s well-founded concern that adverse events experienced by EA patients in uncontrolled settings could compromise the drug development program despite the fact that patients are often very sick, out of treatment options and outside clinical trial inclusion/exclusion criteria, and often have conditions outside of the use being studied. Because the investigational drug is being administered in an uncontrolled setting, any data reported to FDA from such adverse events could (a) result in a clinical hold of ongoing clinical trials and/or (b) complicate the safety findings for that drug during FDA’s review and contribute to a decision to not approve the drug (or take other measures to mitigate the risk).
FDA must, of course, use knowledge generated from any and all patient exposures to an investigational drug to help characterize the safety profile. However, that view is at odds with GAO’s assessment on the issues, which finds FDA is not clear on how EA adverse event data are used in the review process. In the Agency’s only policy statement on this topic, its own EA guidance has acknowledged that this exact situation has occurred:

GAO notes that FDA’s statement, while an improvement over no communication on the issue, is vague in that it contains few details and no specific examples.
GAO’s Recommendation & FDA’s Response
GAO’s report expresses concern that FDA’s lack of clear information may deter manufacturers from giving patients access to their drugs, rather than facilitating appropriate EA drugs to patients with serious or life-threatening diseases. This led to GAO providing a sole recommendation in its report to Congress: FDA should clearly communicate how the Agency will use adverse event data from EA use when reviewing drugs and biologics for approval.
While FDA agreed that “the review of adverse event reports that result from [EA] use must be interpreted with caution,” the Agency found the industry’s concerns related to FDA using such data to influence final approval decisions unfounded. In its response, FDA cited that there have only been two instances in which adverse event events from EA contributed to a decision to put a drug on clinical hold and in both instances the holds were lifted after issues were addressed.  Ultimately FDA agreed with GAO’s recommendation, recognizing that additional clarity on how the Agency uses adverse event data may help allay industry’s concerns.
We disagree with both GAO and FDA. While additional information from FDA is always helpful, the very notion that unexplained adverse events may occur disincentivizes companies from offering EA. FDA has no power to alter that reality. FDA’s confirmation in its own EA guidance and in its response to the GAO report that adverse events from EA patients can lead to a clinical hold or otherwise impact drug development – even if rarely – must be taken into account by responsible sponsors when deciding whether to offer EA.