GAO Examines FDA’s Implementation of GDUFA: Application Review Times Have Improved, But the Agency Needs a Plan for Carryover Fees 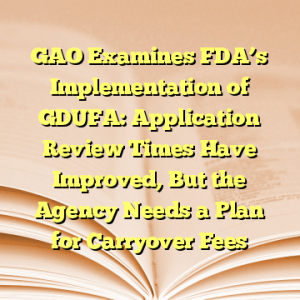 By Kurt R. Karst –
In a new report issued earlier this week, titled “Generic Drug User Fees: Application Review Times Declined, but FDA Should Develop a Plan for Administering Its Unobligated User Fees,” the U.S. Government Accountability Office (“GAO”) examines several aspects of FDA’s implementation of the first iteration of the Generic Drug User Fee Amendments (“GDUFA”). Responding to an inquiry from the U.S. Senate Committee on Health, Education, Labor, and Pensions, the GAO: (1) examines how user fees supported FDA’s generic drug program; (2) describes FDA’s improvements to the generic drug application review process; and (3) analyzes changes in generic drug application review times.  In an appendix to the report, GAO also includes a discussion of the various regulatory science initiatives funded under GDUFA and identified in the GDUFA I Commitment Letter.
Overall, the GAO found that GDUFA user fee funding has been used well to improve FDA’s generic drug program. “FDA has used its user fee funding to enhance OGD’s ability to increase hiring, and undertake numerous activities to improve and speed-up the review of generic drug applications,” says the GAO.  These improvements are apparent in decreased first cycle ANDA and Prior Approval Supplement (“PAS”) review times:

Despite the decrease in original ANDA and PAS first cycle review times, where the rubber meets the road is in approvals. As Office of Generic Drugs Director Kathleen “Cook” Uhl noted earlier this year only 9% of ANDAs in the Fiscal Year 2015 application cohort were approved (or tentatively approved) during a first cycle review, while 71% were the subject of a Complete Response Letter.  The anemic approval figure improved to 42% (and 56% for Complete Response Letters) on a second cycle review.
The GAO’s biggest criticism of FDA’s implementation of GDUFA concerns the Agency’s lack of a plan for dealing with user fee carryover. “FDA has accumulated a large unobligated user fee carryover balance, which it uses as an operating reserve,” says the GAO. “At the beginning of fiscal year 2017, FDA had a carryover of approximately $174 million.”  That figure is way down from the staggering $278 million carryover FDA had amassed by the end of Fiscal Year 2014.  Nevertheless, it’s “an amount nearly as great as the annual, inflation-adjusted user fee collection amount of $299 million” established under GDUFA I, notes the GAO.

Despite the large carryover amounts, FDA has not developed a planning document on how it will administer its carryover—one that includes a fully documented analysis of program costs and risks to ensure that its carryover reflects expected operational needs and probable contingencies. Although FDA uses an internal management report to show GDUFA collection amounts, obligations, and end-of-year carryover amounts, the agency was unable to produce evidence describing whether the carryover of $174 million at the beginning of fiscal year 2017 (or carryover amounts in other years) was within a targeted goal, and it does not have targets for future years in general.

To deal with this lingering issue, and to “ensure efficient use of generic drug user fees, facilitate oversight and transparency, and plan for risks,” the GAO recommends that FDA Commissioner Gottlieb “develop a plan for administering user fee carryover that includes analyses of program costs and risks and reflects actual operational needs and contingencies.”