For the Love of Money: The Trump Administration’s Fiscal Year 2018 FDA Budget Plan 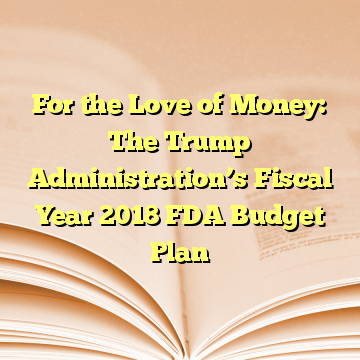 By Kurt R. Karst –
Cue up “For The Love of Money” by The O’Jays (and theme song of The Apprentice) . . . The Trump Administration’s Fiscal Year 2018 Budget Proposal is out!
On May 23, 2017, The White House Office of Management and Budget released President Trump’s Fiscal Year 2018 Budget.  We pored over the volumes of analytical perspectives, supplemental materials, and what not to get a better sense of how FDA is proposed to be funded in the coming fiscal year.  Of course, we had some sense of where the Trump Administration would land on FDA funding.  After all, in the “America First Budget Blueprint” released in March, here’s what the Administration said about FDA:

Recalibrates [FDA] medical product user fees to over $2 billion in 2018, approximately $1 billion over the 2017 annualized CR level, and replaces the need for new budget authority to cover pre-market review costs. To complement the increase in medical product user fees, the Budget includes a package of administrative actions designed to achieve regulatory efficiency and speed the development of safe and effective medical products. In a constrained budget environment, industries that benefit from FDA’s approval can and should pay for their share.

True to the budget blueprint, the proposed FY 2018 Budget would slash discretionary FDA funding by $854 million, but would make up that ground (and more) by doubling user fee funding – a proposal that FDA supported in the Agency’s own budget justification document.  In a volume titled “Major Savings and Reforms,” FDA is tagged for a “reduction” (though it’s really a shift in funding source):

The Budget recalibrates the level of [FDA] medical product user fees to over $2.4 billion in 2018, approximately $1.2 billion over 2017 annualized [Continuing Resolution] level, replacing the need for new appropriated funding to cover pre-market review costs. . . .
Currently, medical product user fees cover an average of 60 percent of FDA premarket review costs, ranging from 30 percent for animal drug review to 70 percent for prescription drugs. Ensuring that FDA has the capacity to carry out its mission is a priority for the Administration.  Industries that directly benefit from FDA’s medical product premarket approval and administrative actions can and should pay more to support FDA’s continued capacity.

The Fiscal Year 2018 Budget includes $5.1 billion in total resources for FDA, which, with the doubling of user fees, would mean an increase of $456 million (or 10%) above the Fiscal Year Continuing Resolution level (see here).  But, as the Alliance for a Stronger FDA points out, FDA would see an $871 million (or 31%) cut in the taxpayer-funded budget authority compared to the final FY2017 Omnibus Appropriations bill.
The Budget also includes a package of “administrative actions” that are “designed to achieve regulatory efficiency and speed the development of safe and effective medical products.” Although details on the “administrative actions” aren’t provided, the proposed actions include:

Earlier this month, HHS Secretary Tom Price penned a letter to Senate Health, Education, Labor and Pensions (“HELP”) Committee members as they considered legislation to reauthorize several user fee programs. “[A]s Congress reauthorizes FDA’s medical product user fee programs, we strongly urge you to include the medical product user fee policy set forth in the President’s Budget Blueprint so that the industries which benefit from these review processes pay the full cost of FDA’s evaluation activities of their products,” wrote Secretary Price.  But Secretary Price’s request was met with resistance.  HELP Committee Chairman Senator Lamar Alexander (R-TX) reportedly commented that while the doubling of user fees is an “interesting proposal,” this is not the time to consider such a proposal.  The request “can be considered the next time the FDA negotiates the user fee agreements with the manufacturers of drugs and devices, but it is way too late to have an impact on this year’s agreements,” said Sen. Alexander.