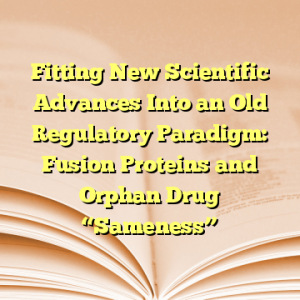 By Kurt R. Karst –
FDA’s Orphan Drug Program, which traces its birth back to the January 4, 1983 enactment of the Orphan Drug Act (“ODA”) (see our previous post here), is probably one of the most successful FDA programs to date.  The success of the ODA is most apparent from the increasing number of orphan drug approvals and orphan drug designations each year (see our previous post here).  (In fact, there are so many orphan drug designation requests these days that FDA had to create an Orphan Drug Modernization Plan – here and here – “to both eliminate a backlog of existing designation requests, and to make sure that the agency can respond in a timely fashion to new applications.”)  But there are other, less visible measures of the success of the ODA, such as FDA’s ability to keep up with and address scientific advances in an aging regulatory paradigm.
Why are there so many orphan drug designation requests submitted to FDA? Well, as FDA notes in the Agency’s Orphan Drug Modernization Plan:

The uptick in designation requests reflects, among other factors, advances in science that allow researchers to target rare diseases that were previously not readily amenable to therapy. This is good news.  It is a reflection of substantial medical progress that’s allowing us to effectively target many vexing diseases.  It is also a reflection of our better understanding of the genetic basis of diseases, which unlocks our ability to define and target rare disorders.

With scientific advances, FDA is also faced with new questions about so-called orphan drug “sameness.”
By way of background, the FDC Act, as amended by the ODA, provides a 7-year period of exclusive marketing to the first sponsor who obtains marketing approval for a designated orphan drug. Once FDA approves a marketing application for a designated drug, the Agency may not approve another firm’s version of the “same drug” for the same disease or condition for seven years, unless the subsequent drug is “different” from the approved orphan drug (or because the sponsor of the first approved product either cannot assure the availability of sufficient quantities of the drug or consents to the approval of other applications).  In addition, FDA’s regulations provide that if the same drug has already been approved for the same orphan disease or condition, with or without orphan drug designation, a sponsor must provide “a plausible hypothesis that its drug may be clinically superior to the first drug” in order to obtain designation, and must demonstrate clinical superiority to obtain approval of a marketing application (if that application is blocked by another sponsor’s orphan drug exclusivity) and also to obtain orphan drug exclusivity.
According to FDA’s orphan drug regulations, a drug is “different” from an approved orphan drug (i.e., is not the “same drug”) if it is either demonstrated to be chemically or structurally distinct from an approved orphan drug, or “clinically superior” to the approved orphan drug.  The degree of chemical or structural similarity that allows FDA to determine whether two drugs are the “same drug” depends on whether the drugs are small molecules or large molecules.  Thus, FDA’s regulations at 21 C.F.R. § 316.3(b)(14) define the term “same drug” to mean the following:

FDA’s “same drug” definition has been in place now for decades – since FDA’s December 29, 1992 final rule became effective on January 28, 1993 – and has withstood the test of time insofar as being able to accommodate scientific advances. Today’s post is an example of a more recent scientific advance that FDA has been able to accommodate under the Agency’s decades-old “same drug” rubric: fusion proteins.
The National Cancer Institute defines a “fusion protein” as:

A protein made from a fusion gene, which is created by joining parts of two different genes. Fusion genes may occur naturally in the body by transfer of DNA between chromosomes. For example, the BCR-ABL gene found in some types of leukemia is a fusion gene that makes the BCR-ABL fusion protein.  Fusion genes and proteins can also be made in the laboratory by combining genes or parts of genes from the same or different organisms.

Fusion proteins or chimeric (\kī-ˈmir-ik) proteins (literally, made of parts from different sources) are proteins created through the joining of two or more genes that originally coded for separate proteins. Translation of this fusion gene results in a single or multiple polypeptides with functional properties derived from each of the original proteins.  Recombinant fusion proteins are created artificially by recombinant DNA technology for use in biological research or therapeutics. Chimeric or chimera usually designate hybrid proteins made of polypeptides having different functions or physico-chemical patterns.  Chimeric mutant proteins occur naturally when a complex mutation, such as a chromosomal translocation, tandem duplication, or retrotransposition creates a novel coding sequence containing parts of the coding sequences from two different genes.

A search of FDA’s Orphan Drug Designations and Approvals Database shows that the Agency has designated several fusion protein products. Thus far, we are aware of two fusion protein BLA licenses issued by FDA.  Both products raised questions about orphan drug “sameness” at FDA, and have helped to solidify FDA’s position on when two products, one of which is a fusion protein, is considered the “same drug” as the “naked” (i.e., non-fused) product.  Specifically, FDA’s position is that a post-translational fusing of amino acids to the drug results in a “same drug” determination, while a pre-translational fusing of amino acids to the drug results in a “different drug” determination.
The “sameness” analysis above is apparent in FDA’s decision to grant a period of orphan drug exclusivity for ALPROLIX [Coagulation Factor IX (Recombinant), Fc Fusion Protein], which FDA licensed on April 28, 2014 under BLA 125444 for use in adults and children with Hemophilia B for control and prevention of bleeding episodes, perioperative management, and routine prophylaxis to prevent or reduce the frequency of bleeding episodes. In an April 2014 email memorandum documenting the decision to grant orphan drug exclusivity for ALPROLIX, FDA commented:

[T]he Office of Blood and Blood products in CBER was contacted to discuss exclusivity for Coagulation factor IX, Fc fusion protein. It was noted that the protein that is fused to factor IX is a dimer.  One monomer of the dimer is manufactured fused to factor IX pretranslationally.  The second monomer is then a post-translational modification.  Therefore, the changes in structure to the factor IX protein do involve pre-trnaslational [sic] modification. It was agreed that this was a different product than recombinant factor IX and is thus eligible for orphan drug exclusivity. [(emphasis added)]

Another example of FDA’s application of the Agency’s “same drug” rubric in the context of a fusion protein is IDELVION [Coagulation Factor IX (Recombinant), Albumin Fusion Protein], which FDA licensed on March 4, 2016 under BLA 125582 for the (1) on-demand control and prevention of bleeding episodes, (2) perioperative management of bleeding, and (3) routine prophylaxis to prevent or reduce the frequency of bleeding episodes.
Although the sponsor of IDELVION initially thought that FDA might consider its product to be the same as another Coagulation Factor IX product, BeneFIX (BLA 103677), and thus require a plausible hypothesis of clinical superiority in order to obtain orphan drug designation, FDA determined otherwise. According to a March 2012 Memorandum from FDA’s Office of Orphan Product Development:

So what might be up next on FDA’s orphan drug “sameness” plate? With FDA on the verge of licensing the first gene therapy product, we think that gene therapy “sameness” might be the next hot topic.  But we’ll leave a discussion of that issue for another day.