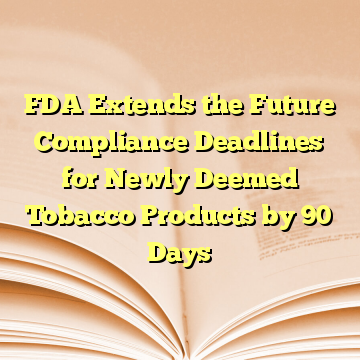 By David B. Clissold –
As we previously reported, FDA issued a final rule in May 2016 that extended the agency’s authority to regulate all tobacco products, including e-cigarettes, cigars, hookah tobacco and pipe tobacco, among others. The final rule contained numerous compliance deadlines for manufacturers and retailers of these products.
As FDA explained in a “Web Statement” dated May 3, 2017, in lawsuits over the final rule involving e-cigarettes, cigars, and pipe tobacco, FDA had stated that it would defer enforcement of all future compliance deadlines for these particular products for three months. The Web Statement explains that the three-month extension applies to the future compliance deadlines for all categories of newly regulated products, not just those products involved in the lawsuits. FDA said that the extension “will allow new leadership at the FDA and the Department of Health and Human Services additional time to more fully consider issues raised by the final rule that are now the subject of multiple lawsuits in federal court,” and said that it would “issue guidance describing its position in the near future.”
FDA has now announced the availability of that guidance. The extension applies to compliance deadlines set for May 10, 2017 or later, and includes deadlines for the submission of cigar warning label plans, registration of manufacturers and listing of products, ingredient listing, the submission of health documents, substantial equivalence exemption requests, substantial equivalence applications, premarket tobacco product applications, and harmful and potentially harmful constituent reports. However, any compliance deadline that occurred before May 10, 2017, such as mandatory age and photo-ID checks, is not affected. The new compliance dates are detailed in a chart that accompanies the guidance.