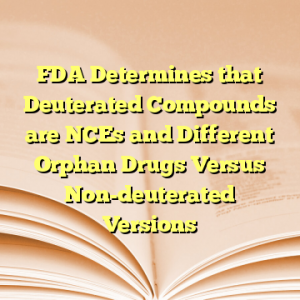 By Kurt R. Karst –
Back in mid-May 2017, when FDA issued the fourth cumulative supplement to the 37th edition of the Orange Book, observant readers may have noticed a couple of interesting entries on page A-7 of the publication. There, in the “PATENT AND EXCLUSIVITY DRUG PRODUCT LIST,” FDA showed the additon of several patents and two periods of exclusivity for Teva Pharmaceuticals, Inc.’s “(Teva’s”) AUSTEDO (deutetrabenazine) Tablets: (1) a period of New Chemical Entity (“NCE”) exclusivity expiring on April 3, 2022; and (2) a period of orphan drug exclusivity expiring on April 3, 2024.
FDA approved AUSTEDO on April 3, 3017 under NDA 208082 for the treatment of chorea associated with Huntington’s disease. What makes AUSTEDO particularly interesting is that it is the first deuterated drug product approved by FDA.  And it is a deuterated version of a previously approved drug: XENAZINE (tetrabenazine) Tablets, which FDA approved on August 15, 2008 under NDA 021894 for the treatment of chorea associated with Huntington’s disease.
What is a deuterated drug? Deuterium (containing one neutron, one proton, and one electron) is a non-radioactive isotope of hydrogen that is a different atom than hydrogen (containing one proton and one electron).  A deuterium atom may be covalently linked to a carbon atom and cannot be removed from the carbon or exchanged with hydrogen.  A deuterated compound can have significantly different metabolic stability and/or pharmacokinetics compared to the non-deuterated version of the compound.
A couple of years ago we speculated that because of FDA’s structure-centric interpretation of “active moiety” (rather than an activity-based interpretation) (see here), under which a drug is classified as a NCE regardless of which portions of the active ingredient contribute to the overall therapeutic effect of the drug, FDA would likely determine that deutetrabenazine (known then as SD-809) is an NCE eligible for 5-year exclusivity. We also speculated that, as a designated orphan drug, FDA would grant a period of 7-year orphan drug exclusivity upon the approval of deutetrabenazine without requiring the NDA sponsor to demonstrate that the drug is “clinically superior” to XENAZINE on the basis that deutetrabenazine and tetrabenazine are not the “same drug.”  (Under FDA’s orphan drug regulations at 21 C.F.R. § 316.3(b)(13)(i), the term “same drug” means, in part, “a drug that contains the same active moiety as a previously approved drug and is intended for the same use as the previously approved drug. . . .”)
While FDA’s Orange Book entries show that Teva was, in fact, awarded both NCE and orphan drug exclusivity, we thought there might be a more robust analysis explaining the Agency’s decision. And there is!  But it’s not in FDA’s Approval Package for AUSTEDO NDA 208082.  It’s in a July 31, 2015 memorandum from the CDER Exclusivity Board that we were able to obtain. That memorandum from the CDER Exclusivity Board documents the recommendation of the CDER Exclusivity Board regarding whether dutetrabenazine has a different active moiety from tetrabenazine:

FDA’s rationale for determining that tetrabenazine and dutetrabenazine are not the same active moiety comes down to a single, simple paragraph in the 5-page memorandum:

There you have it! FDA’s form over function approach means that relatively small changes to a molecule, including deuterium analogues, qualify for NCE exclusivity, while more significant changes that improve the activity of a drug, but that do not change the molecule that is the active moiety, don’t result in NCE exclusivity.