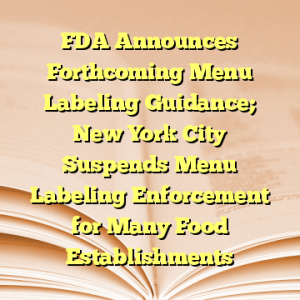 By Etan J. Yeshua –
Facing a lawsuit from the food industry and pressure from FDA, the City of New York agreed on Friday to not enforce menu labeling requirements against many restaurants, convenience stores, and other retail food establishments until May 7, 2018. The move aligns the City’s enforcement timeline with FDA’s nationwide compliance date and marks a reversal for the City, which previously announced that it would issue fines and notices of violation beginning on August 21, 2017.
The policy change was the result of a legal challenge brought by food industry trade groups who argued that the City’s early enforcement of its own regulations was unlawful. As we previously reported here, the Federal Food, Drug, and Cosmetic Act, which establishes national menu labeling requirements, permits local menu labeling rules that are identical to the federal requirements. The City has said that its menu labeling rules are substantively identical to the federal statutory and regulatory requirements. But in a motion for preliminary injunction against the City, the plaintiffs (National Association of Convenience Stores, New York Association of Convenience Stores, Food Marketing Institute, and National Restaurant Association) argued that the City’s imposition of an earlier compliance date would be an additional, non-identical obligation. Therefore, plaintiffs argued, the City was preempted from early enforcement.
Though not a party to the lawsuit, the FDA weighed in and agreed with the plaintiffs in a Statement of Interest filed with the court on August 14: “Acknowledging that the federal requirements have come into effect, the City asserts that it is not bound by the terms of one of those requirements, the date of compliance. Because the governing statutory and regulatory framework established by the Act expressly preempts the City from making such a unilateral determination, the City should not be allowed to begin enforcement of [its menu labeling requirements] in advance of the FDA’s national compliance date.”
Before oral arguments could be heard, the City and the trade groups reached an agreement, which was filed with the Court on Friday August 25. The City agreed that it will not take enforcement action against noncompliant establishments that are members of the plaintiff trade groups, until the federal compliance date. In exchange, the trade groups agreed to “continue to educate and encourage their members to continue the process of coming into compliance . . . as soon as practicable” and to encourage those members who are already complying to stay in compliance. The agreement does not prevent the City from “continuing to educate” establishments about its menu labeling requirements.
Earlier on Friday, FDA Commissioner Scott Gottlieb issued a statement that highlighted the preemptive effect of the federal menu labeling requirements. “Americans should not have to navigate variable information about the foods they eat when traveling from state to state — or city to city,” Gottlieb said. “Inconsistent state and local requirements may also drive up the cost of food, and sow confusion, by requiring restaurants and other covered establishments to post different information based on location.” The Commissioner’s statement also announced that the Agency would issue “additional, practical guidance on the menu labeling requirements by the end of this year.”
The statement did not address whether FDA planned to revise its final menu labeling regulations. Earlier this year, the Agency said it was reconsidering certain aspects of the final rule and invited comments about how FDA “might further reduce the regulatory burden or increase flexibility.” To date, FDA has received over 69,000 public comments. The Commissioner gave no indication that the reconsideration would result in an extension of the compliance date beyond May 7, 2018. The forthcoming guidance, he said, “should allow covered establishments to implement the requirements by next year’s compliance date.”