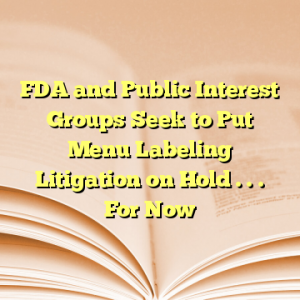 By Etan J. Yeshua –
Two public interest groups that are suing FDA over the Agency’s extension of the menu labeling compliance date have agreed to stay the litigation if FDA issues additional guidance before the end of the year and publicly confirms that it will not provide another extension.
As we previously reported, FDA was taken to court in June by the Center for Science in the Public Interest (CSPI) and the National Consumers League (NCL) over the Agency’s last minute extension of the compliance date for restaurant menu labeling. A month later, CSPI and NCL jointly sued FDA to have the delay vacated and a more immediate compliance date instated. They argued that the delay was unlawful because the Agency did not articulate a rational explanation for the delay or provide an opportunity for public comments before the delay took effect. The government filed a Motion to Dismiss in August, and the plaintiffs were scheduled to file their opposition or an amended complaint by September 19.
Meanwhile, as we reported here, FDA Commissioner Scott Gottlieb announced on August 25 that the Agency would issue “additional guidance” about menu labeling before the end of the year. His announcement gave no indication that the rule itself would be revised. Last Friday, CSPI, NCL, and FDA filed a Joint Motion for Stay that would put the litigation on hold in order to “allow FDA adequate time to prepare this guidance . . . .” In sum, the plaintiffs would agree to abandon their efforts for a more immediate compliance date provided that FDA takes steps to lock in place the current May 7, 2018 deadline.
If granted by the court, the Joint Motion would require that FDA, before the end of the year, “use its best efforts to confirm in a Federal Register publication that the Menu Labeling Rule’s compliance date is May 7, 2018.” If FDA does not issue that announcement, or if it fails to publish the additional guidance before the end of the year, or if FDA gives any indication (“by rule, guidance, public statement, publicly available document, or otherwise”) that the compliance date “could be or will be” extended, the stay may be lifted and the litigation may proceed with “expedited consideration.”