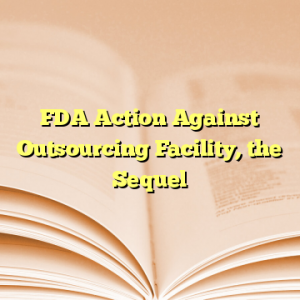 By Douglas B. Farquhar –
Just last month, we blogged about what we believe to be the first Consent Decree signed by the government and an Outsourcing Facility, shutting down operations under judicial order until certain rigorous conditions are met.  Now, comes the second.
Isomeric Pharmacy Solutions, LLC and three affiliated individuals (all Defendants in the matter) signed a Consent Decree that was entered in federal court in Utah (U.S. District Court for the Central Division of the District of Utah) on August 3.  The Outsourcing Facility was also the subject of a Warning Letter in December 2016 and a recall about four months ago.
The Complaint filed in the case alleges that the named individual Defendants were owners or the Chief Operating Officer for the Outsourcing Facility, and that the Outsourcing Facility distributed drugs that were supposed to be sterile but that had “visible black particles” in a preservative-free injectable drug.  The Complaint also alleged that Isomeric found “spore-forming bacteria” in media fills (which are designed to demonstrate that there are no breaches of sterility in the manufacturing process), and contamination of aseptic processing areas with bacteria and fungus.  While the Complaint alleges that Isomeric detected flaws in products relating to, for example, particle size, the Complaint does not allege that any microbial contamination was found in products.  The Complaint also alleges that Isomeric distributed unapproved new drugs.
Under the terms of the Consent Decree, the Defendants are prohibited from distributing drugs manufactured at any of their facilities until and unless they take hire a qualified consultant who determines they are operating in compliance with current FDA’s Good Manufacturing Practice requirements, and FDA certifies, in writing, that FDA agrees.
Outsourcing Facilities are relatively new, quasi-drug manufacturing entities established by legislation in November of 2013 (see our previous post here).  They are permitted to compound and distribute certain drugs under certain conditions, without FDA approvals, adequate directions for use , compliance with new serialization and other drug tracking requirements, and without patient-specific prescriptions from health care providers (so-called “office use” compounding).