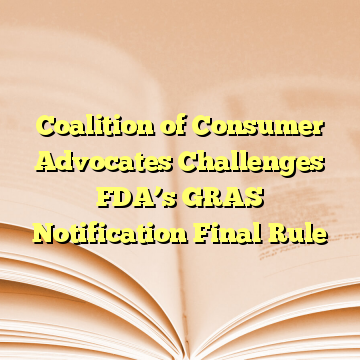 By Ricardo Carvajal –
A coalition of consumer advocates filed a lawsuit challenging FDA’s final rule that formally established the GRAS notification system.  The complaint alleges that the rule “unlawfully subdelegates statutory authority to private parties,” that the “secret GRAS system is contrary to the FDCA,” and that the “criteria for GRAS determinations are contrary to the FDCA.”  Plaintiffs ask the court to vacate the rule and direct the agency to “correct the legal deficiencies found by the court.”
The lawsuit was foreshadowed in critical press releases issued by two of Plaintiffs shortly after issuance of the final rule, and is the latest parry in Plaintiffs’ years-long battle to call attention to alleged deficiencies in FDA’s oversight of the GRAS exception.  The central allegations and arguments in the complaint have been previously raised and addressed in one or another context, so we won’t belabor them here (see, for example, FDA’s memorandum submitted to the court in prior litigation, and our prior postings here and here).  Essentially, Plaintiffs fault FDA for not imposing certain requirements on industry that FDA lacks any apparent statutory authority to impose.  For those seeking an antidote in the form of a more constructive take on the GRAS system, we suggest this supplemental issue of Regulatory Toxicology and Pharmacology.
The merits of Plaintiffs’ case may be entirely beside the point.  Industry should expect that the litigation will be used as a cudgel in the court of public opinion as it unfolds.  In the interim, FDA will be forced to expend its scarce resources to defend Plaintiffs’ dubious claims – a result that seems unlikely to advance the cause of food safety.