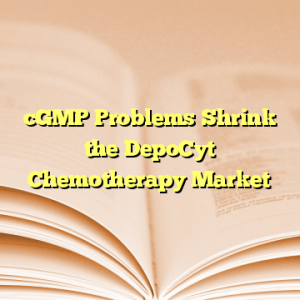 By Mark I. Schwartz –
In late June, Pacira Pharmaceuticals informed the FDA, the European Medicines Agency, and Health Canada that the company had filed a notice with the U.S. Securities and Exchange Commission, advising of its intent to discontinue all future production of DepoCyt® due to “…persistent technical issues specific to the DepoCyt(e) manufacturing process…” suggesting that the company was having significant cGMP issues. Pacira added that the decision did not affect any product that had already been distributed to customers or administered to patients.
DepoCyt® (cytarabine liposome injection) (approved under NDA 021041) is indicated for the intrathecal treatment of lymphomatous meningitis, and has been manufactured at the Pacira facility in San Diego, California since approval was first obtained in 1999. That was an accelerated approval, and full approval followed in 2007.  The Orange Book lists other manufacturers of cytarabine, including Hospira, Mylan, West-Ward, and Fresenius-Kabi (Teva is known to have exited the cytarabine market relatively recently), though none of those products appear to be in exactly the same dosage form as DepoCyt, as none of them are “liposomal” cytarabine.
It is unclear whether this difference in dosage form will prevent physicians from using them to treat lymphomatous meningitis as, according to the U.S. National Library of Medicine, the other approved cytarabine products are indicated for use alone or with other chemotherapy drugs to treat other conditions, including certain types of leukemia, including acute myeloid leukemia, acute lymphocytic leukemia, and chronic myelogenous leukemia, and some are not approved for intrathecal use as was DepoCyt. That said, some medical sources list therapeutic alternatives to DepoCyt as including non-liposomal cytarabine (for example, the European Medicines Agency).
Cytarabine was on the CDER drug shortage list in 2010 and 2011 as some of the manufacturers had cGMP issues and another had difficulty obtaining enough of the Active Pharmaceutical Ingredient, all of which impeded manufacturing and distribution of the drug.
Regarding Pacira’s DepoCyt, the San Diego facility was inspected as recently as 2015 by FDA, and that inspection as well as the prior several are all listed as Voluntary Action Indicated (“VAI”) on FDA’s website. Furthermore, a review of the Pacira 483s from 2014 and 2012 does not provide much insight as to the types of “persistent technical issues” that Pacira might be referring to.   (We were unable to obtain the 2015 483 Inspectional Observations for review).
On the other hand, a July 2012 inspection carried out jointly by the United Kingdom and French medicines regulatory agencies identified a number of “manufacturing deficiencies.” According to the agencies, the more serious findings related to “a lack of adequate sterility assurance in the manufacturing process…” and these findings “posed a theoretical risk of sterility failure…”  As a result, the European Medicines Agency recalled DepoCyte from all European countries where suitable alternative treatments were available.
It is unclear whether the current problems also relate to a lack of sterility assurance. A Pacira spokesperson stated that “[g]iven that alternative therapies are available for patients with lymphomatous meningitis, Pacira believes that it is in the best interests of patients to permanently discontinue the product, rather than face the prospect of prolonged uncertainty about product availability.”
One can only hope that the cytarabine market is not headed towards another shortage situation.