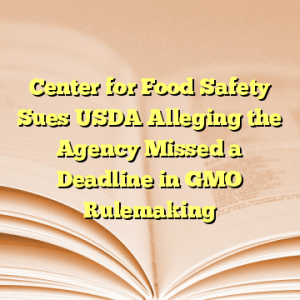 By Riëtte van Laack –
As readers of this blog may recall, last year on July 29, 2016, the National Bioengineered Food Disclosure Standard Act (“the Act”) was signed into law.  This Act directs the Agricultural Marketing Service of the USDA to develop “a national mandatory bioengineered food disclosure standard” and establish regulation necessary to carry out the standard by July 29, 2018. The Act includes the possible option of an electronic disclosure rather than a written disclosure. To be sure that the electronic disclosure is effective, the Act directs USDA to “[n]ot later than 1 year after the date of enactment of [the Act], . . . conduct a study to identify potential technological challenges that may impact whether consumers would have access to the bioengineering disclosure through electronic or digital disclosure methods.” In its request for proposal, USDA indicated that it interprets this provision to require the publication of the final report by July 29, 2017.
Since July 29, 2017 came and went without a study report having been published, USDA presumably failed to meet its deadline. Concerned that this delay will jeopardize the timing of the final rule, the Center for Food Safety (CFS) went to court (CFS is a public interest organization that describes itself as a “champion” of mandatory GMO labeling.). On August 25, 2017, CFS filed a Complaint for Declaratory and Injunctive Relief. CFS requests that the court establish a court-ordered timeline for USDA to finish and publish the study, as soon as reasonably practicable, and to solicit and consider public comments.