Celgene Pays $280m in False Claims Act Case in Which U.S. Did Not Intervene 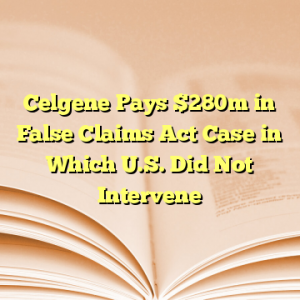 By Anne K. Walsh & Andrew J. Hull –
The Department of Justice announced on July 24, 2017, that Celgene agreed, without admitting liability, to pay a total of $280 million to settle a qui tam case relating to two of its drug products, Thalomid® and Revlimid®. The qui tam complaint filed in the U.S. District Court for the Central District of California, alleged that Celgene promoted the use of these two drugs to treat cancer patients outside the scope of the FDA-approved uses for those drugs. In addition to allegations that the company promoted the drug for numerous uses that were off-label, the relator alleged that:

Celgene encouraged the tampering of the coding used in seeking reimbursement from government healthcare programs in order to conceal that the drugs were being prescribed for off-label uses;
Celgene made “false and misleading statements” by “improperly influencing the content” of authoritative literature and compendia, concealing or downplaying adverse events, and encouraging doctors to change diagnosis codes relating to Revlimid®; and
Celgene violated the Anti-Kickback Statute by paying physicians who prescribed Thalomid® or Revlimid® to conduct speaker programs, to conduct clinical trials, and to serve as authors on publications, to work as consultants, and to induce purchases of the drugs by “defraying patients’ co-payment obligations” for those drugs through its contributions to foundations that provided financial support to patients that met certain income requirements.

All issues were resolved in the parties’ Settlement Agreement. The $280 million payout will be paid in a federal settlement amount of more than $259 million and a payment of nearly $21 million to states for Medicaid expenditures. The agreement states that relator Beverly Brown, a former Celgene employee, will receive a share of the settlement pursuant to a separate agreement.The government’s decision not to intervene in this case is noteworthy, even though the reason for the government’s decision is unknown. The following factors may have played a role:

This case involves oncology drugs, and cancer-related therapies are in a different category when it comes to reimbursement of off-label uses and government enforcement. Longstanding CMS Policy allows reimbursement of certain off-label uses of drugs to treat cancer if those uses are supported in accepted drug compendia or supported by clinical research. See CMS Policy Manual, chap. 15, § 50.4.5. FDA officials have also recognized the value of off-label use of drugs in oncology treatment (see here and here).
The venue of this case (U.S. District Court for the Central District of California) may have dissuaded the government from intervening as the same court in 2014 dismissed a similar qui tam complaint based on an off-label promotion theory. See United States ex rel. Modglin v. DJO Global Inc., 48 F. Supp. 3d 1362, 1392 (C.D. Cal. 2014).

We have discussed the application of the Supreme Court’s recent Escobar decision on materiality in FCA implied false certification cases involving FDA-related activities, particularly in the First Circuit’s D’Agostino decision (see our post here) and the Ninth Circuit’s Gilead decision (see our post here). It does not appear that the favorable findings in Escobar would have helped Celgene here given that the allegations –taken at face value – describe the company having caused physicians to submit false claims by changing the appropriate diagnosis code for the Revlimid® prescriptions.
At the end of the day, the government receives a big payment, even though it did not intervene and litigate the matter. Winner, winner.