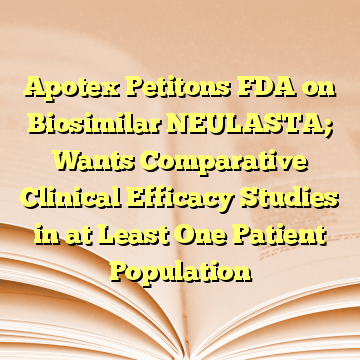 By Sara W. Koblitz –
Apotex and its subsidiary Apobiologix submitted a Citizen Petition (Docket No. FDA-2017-P-2528) on April 21, 2017 asking that FDA ensure a level playing field for all biosimilar applicants referencing NEULASTA (pegfilgrastim). A common tactic in the small molecule world to introduce additional hurdles to generic approval in an effort to extend market exclusivity, it isn’t typical to see this type of petition from a party who isn’t the brand or innovator.  But, as we have seen recently, the BPCIA is setting up some interesting competition schemes in an effort to reduce costs for consumers. As we discussed, whether increased competition between biosimilars will actually reduce costs for consumers in any meaningful way still remains to be seen, but it’s probably a positive indication for pricing that biosimilar manufacturers are trying to keep each other from the market.
Apotex submitted a 351(k) application to FDA for NEUPOGEN and NEULASTA, likely in December 2014. Apotex noted that it was required to perform its comparative studies in intended patient populations.  But, Apotex explained, Coherus issued a press release in October 2016 indicating that it had filed a 351(k) application for NEULASTA, but only evaluated the clinical effect in healthy subjects.
In this petition, Apotex asks FDA to require all biosimilar applicants referencing NEULASTA to conduct comparative clinical efficacy studies in at least one intended patient population. Apotex argues that comparative studies in healthy patients alone would not demonstrate that there are “no clinically meaningful differences” between a proposed biosimilar and NEULASTA for one of the indications of NEUALSTA, a decreased incidence of infection.  The argument was based on the notion that every approved biosimilar thus far has conducted trials in at least one indicated patient population.  The question at issue here is ostensibly what FDA really means by the term “no clinically meaningful differences.”  But the real issue Apotex wants to address here is consistency of approval standards across biosimilar manufacturers.
Additionally, Apotex requested that FDA require biosimilar applicants referencing NEULASTA to conduct immunogenicity studies over at least four cycles. Apotex makes an interesting point that if FDA required sponsors to conduct more rigorous comparative clinical efficacy patients in cancer chemotherapy patients, oncologists are more likely to consider using a biosimilar than the reference product.  If that is in fact true, then it might behoove biosimilar manufacturers to perform this type of study for marketing purposes alone.