Another Brick in the Wall: A New Commitment Implementing the Mutual Recognition of Inspections 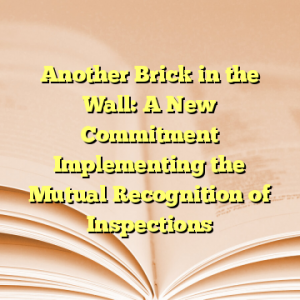 By Mark I. Schwartz –
According to a European Medicines Agency (EMA) press release issued on August 23, 2017, the FDA, the European Commission (EC), and the European Medicines Agency (EMA) recently signed a new confidentiality commitment that allows the FDA to share non-public and commercially confidential information, including trade secret information, contained in drug inspection reports with these European Agencies.
As you may recall, back in March, we reported that the United States and the European Union had agreed to recognize each other’s drug cGMP inspections. The agreement reached (see here and here) amended the Pharmaceutical Annex to the 1998 U.S. – E.U. Mutual Recognition Agreement, with a view to avoiding duplicative inspections and saving millions of dollars in repetitive inspections.
At the time, FDA stated that they believe this “…initiative will result in greater efficiencies for both regulatory systems and provide a more practical means to oversee the large number of drug manufacturing facilities outside of the U.S. and EU.” Until then, the EU and FDA would sometimes inspect the same facilities within a brief period of time. With the agreement announced earlier this year, such duplication is expected to become the exception, rather than the rule.
Fundamentally, the problem has been that while European regulators have, for years, shared with FDA unredacted inspection reports from their European inspections, FDA has shared only redacted inspection reports with our European counterparts.  These redacted reports have been of limited utility to European regulators in determining whether any regulatory action needed to be taken against U.S. based pharmaceutical facilities.
Then, in 2012, with the enactment of The Food and Drug Administration Safety and Innovation Act (FDASIA), FDA was provided with the statutory authority to enter into memoranda of understanding for purposes of information exchanges with foreign governments, and specifically with the authority to share trade secret information under certain circumstances. Section 708(c) of the Federal Food, Drug, and Cosmetic Act, codified at 21 USC 379(c), reads in part as follows:

As a result, since the enactment of FDASIA, FDA has had the statutory authority to share inspectional information containing trade secrets with European counterparts, however, until recently, FDA had presumably been unwilling or unable to certify under 21 USC 379(c)(1) that such governments “…had the authority and demonstrated ability to protect trade secret information from disclosure.”
That appears to have changed, as stated in the EMA press release: “[t]he new confidentiality commitment formally recognizes that FDA’s EU counterparts have the authority and demonstrated ability to protect the relevant information. This step now allows the sharing of full inspection reports, allowing regulators to make decisions based on findings in each other’s inspection reports and to make better use of their inspection resources to focus on manufacturing sites of higher risk.”
We will continue to monitor the implementation of this inspection initiative with the EU, and to assess whether it bears the fruits its FDA proponents advertise, without the drawbacks that many fear.