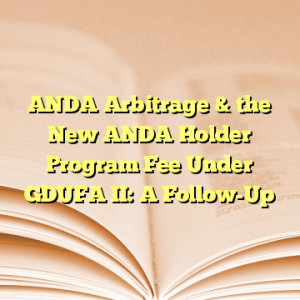 By Kurt R. Karst –
A couple of months ago, as Congress was considering legislation that would ultimately be enacted as the Food and Drug Administration Reauthorization Act of 2017 (“FDARA”) (see our FDARA Summary and Analysis here), we put up a post on the new user fee structure under the second iteration of the Generic Drug User Fee Amendments (“GDUFA II”), and the new ANDA Holder Program Fee in particular.  Now that FDA has published the Generic Drug User Fee Rates for Fiscal Year 2018, and as we quickly approach the October 1, 2017 deadline when the state of ANDAs solidifies and fee payments are due (actually, fees are due no later than the first business day on or after October 1 of each such year), we thought it would be a good time to remind some ANDA owners who have a small number of approved ANDAs, or who are just over the application count threshold for paying a higher ANDA Holder Program Fee, that there’s another option out there to consider.  So we’re republishing and updating our previous post on the topic.
GDUFA II significantly changes the current user fee system and structure that have been in place the past five fiscal years under GDUFA I.  Not only will FDA collect a greater amount of user fee funding each year ($493.6 million annually adjusted for inflation), but one fee type will be eliminated (i.e., the Prior Approval Supplement fee), while others fees would be modified (e.g., a new Finished Dosage Form (“FDF”) facility fee for Contract Manufacturing Organizations (“CMO”)).  GDUFA II will also introduce a new fee type – the ANDA Holder Program Fee – that will account for 35% of annual fee funding.  The annual ANDA Holder Program Fee, along with the annual CMO FDF facility fee, are “small business considerations,” according to FDA.
Under the GDUFA II fee structure, the ANDA Holder Program Fee is set up as follows: a firm and its affiliates pays one program fee each fiscal year commensurate with the number of approved ANDAs (both active and discontinued ANDAs) that the firm and its affiliates collectively own. The program fee to be paid each year depends on the number of ANDAs owned.  Firms do not pay a per-ANDA fee.  Instead, the program fee is split into three tiers that represent different positions held by the firms and their affiliates within the market.  Specifically, FDARA amended the FDC Act to add Section  § 744B(b)(2)(E) to state:

The statute (FDC Act 744B(g)(5)) was also amended to include certain penalties for failure to pay the new ANDA Holder Program Fee:

(A) IN GENERAL.—A person who fails to pay a fee as required under subsection (a)(5) by the date that is 20 calendar days after the due date, as specified in subparagraph (D) of such subsection, shall be subject to the following:
(i) The Secretary shall place the person on a publicly available arrears list.
(ii) Any abbreviated new drug application submitted by the generic drug applicant or an affiliate of such applicant shall not be received, within the meaning of section 505(j)(5)(A).
(iii) All drugs marketed pursuant to any abbreviated new drug application held by such applicant or an affiliate of such applicant shall be deemed misbranded under section 502(aa).
(B) APPLICATION OF PENALTIES.—The penalties under subparagraph (A) shall apply until the fee required under subsection (a)(5) is paid.

At 35% of the overall GDUFA user fee funding, the ANDA Holder Program Fee is a decent amount of cash for some companies to lay out. And for some companies with a small number of ANDAs, they’ll be laying out cash for drug products that they don’t currently market, because their ANDAs are in stasis, as identified in the Discontinued Drug Product List section of the Orange Book.
Over the past several months, FDA has collected information from ANDA sponsors – see here and here – in an effort to set the fee, which was published on August 29, 2017.  The Generic Drug Applicant Program Fee rates for Fiscal Year 2018 were set as follows:

We understand from FDA that should ANDA ownership transfer prior to October 1, 2017, the mechanism of communication to FDA should be as follows: 1. Transfer of Ownership Letters (Seller) and Acknowledgment of Transfer of Ownership letters (Buyer) to the Office of Generic Drugs; and 2. Email and call CDER Collections notifying them of the change in ownership.
A new venture might offer some user fee relief and a solution to companies that have discontinued ANDAs for drug products not currently marketed. A company called ANDA Repository, LLC (info@andarepository.com; and http://ift.tt/2x1x2re) is offering what we can only characterize as “ANDA arbitrage.”  Imagine, if you will, a parking lot.  The owner of a car that is not being used on a daily basis needs a parking space for that car.  In exchange for that parking space (and an annual fee) the car’s owner transfers title of the automobile to the parking lot owner.  The old owner of the car can, with appropriate notice, take back ownership when he decides that he wants to use the automobile again.  Provided the parking lot owner has enough cars, this can be a beneficial venture for all of the parties involved.
In the imagery above, the automobile owner is an ANDA sponsor, and the parking lot owner is ANDA Repository, LLC. If ANDA Repository, LLC is able to obtain title to 20 or more ANDAs, then the company will be identified as a “large size operation” and will pay a full generic drug applicant program fee regardless of how may additional ANDAs are owned. In exchange for its services, ANDA Repository, LLC will charge an ANDA sponsor an annual fee, which would be significantly less than the ANDA Holder Program Fee such ANDA sponsor would otherwise pay as a small or medium size operation.  Not a bad idea!