All Backed Up: FDA Reverses Course and Denies NCE Exclusivity for PREPOPIK 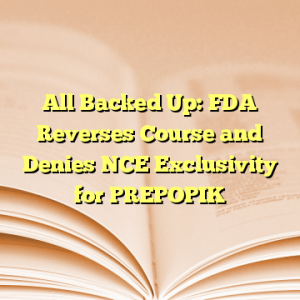 By Kurt R. Karst –
In a case full of twists and turns, there’s a new twist!
In March 2017, we reported on the status of litigation between FDA and Ferring Pharmaceuticals Inc. (“Ferring”) over the availability of 5-year New Chemical Entity (“NCE”) exclusivity for Ferring’s colonoscopy preparation, PREPOPIK (sodium picosulfate, magnesium oxide, and citric acid) for Oral Solution (NDA 202535; approved on July 16, 2012). We noted that FDA quietly settled the case after dropping an appeal to the DC Circuit (see our previous post here), and that the settlement would have some pretty significant effects on FDA’s consideration of ANDAs for multiple drug products, including DUAVEE (conjugated estrogens/bazedoxifene) Tablets (NDA 022247; approved on October 3, 2013), STRIBILD (elvitegravir, cobicistat, emtricitabine, tenofovir disoproxil fumarate) Tablets (NDA 203100; approved on August 27, 2012), ANORO ELLIPTA (umeclidinium /vilanterol) Powder for Inhalation (NDA 203975; approved on December 18, 2013), and BREO ELLIPTA (fluticasone furoate and vilanterol trifenatate) Inhalation Powder (NDA 204275 ; approved on May 10, 2013).
Following the settlement, FDA responded to various pending Citizen Petitions (here and here) saying that in light of the U .S. District Court of the District of Columbia’s September 2016 decision in Ferring Pharmaceuticals, Inc. v. Burwell (see our previous post here), a decision with which FDA does not necessarily agree, the Agency would grant a period of NCE exclusivity.  Judge Rudolph Contreras’s September 2016 Memorandum Opinion granted a Motion for Reconsideration filed by Ferring requesting reconsideration of the DC District Court’s March 2016 ruling that FDA’s pre-October 10, 2014 interpretation of the FDC Act’s NCE exclusivity provisions as applied to a newly approved Fixed-Dose Combination (“FDC”) drug product containing an NCE and a previously approved drug, such as PREPOPIK was initially considered to contain (see our previous post here), was not arbitrary and capricious.  Although Judge Contreras initially backed FDA’s decision to deny NCE exclusivity for PREPOPIK, he reversed course after considering several precedents identified by Ferring in the company’s Motion for Reconsideration and remanded the matter to FDA.
Earlier this year FDA updated the Orange Book to show NCE exclusivity . . . but only for DUAVEE, STRIBILD, ANORO ELLIPTA, BREO ELLIPTA, and related NDAs for drug products that fall under the Agency’s NCE exclusivity “umbrella policy” – e.g., TYBOST (cobicistat) Tablets (NDA 203094; approved on September 24, 2014) and VITEKTA (elvitegravir) Tablets (NDA NDA 203093; approved on September 24, 2014).  FDA did not update the Orange Book to show the addition of a period of NCE exclusivity for Ferring’s PREPOPIK, which the Agency previously determined contained an NCE (i.e., sodium picosulfate).  Instead, in April 2017, FDA sent a letter to Ferring saying that the Agency was unlikely to grant NCE exclusivity for PREPOPIK:

FDA gave Ferring (and other stakeholders) the opportunity to respond, which Ferring did in a April 19, 2017 FDA submission that expresses the company’s frustration with and opposition to FDA’s decision:

The April 5 letter is an abrupt and unexplained departure from the previous interpretation of the statutory and regulatory provisions as they apply to Prepopik. Not once in the nearly eight years in which FDA has been involved with the product — including the review and approval of Prepopik, an extensive citizen petition process, and litigation over the exclusivity of the product — has the agency identified picosulfate as anything but an active moiety.  Now, with no explanation, the agency appears to want to take the position that the covalently bound sulfur-based appendages in sodium picosulfate could be considered “esters.”
The time for a new interpretation of the definition of the term “ester,” or a new analysis of the chemistry of picosulfate, has long passed. Far too many regulatory and litigation decisions have been based on the agency’s original and oft-repeated determination that picosulfate is a novel active moiety, rather than an ester of a previously approved active moiety.  Moreover, the agency has provided no new information that would support its apparent change in interpretation, and therefore Ferring lacks any meaningful opportunity to comment upon or respond to the agency’s basis for its change in position.  If FDA intends to change its interpretation of the term “ester,” particularly in this case, the agency must follow appropriate administrative procedures.  In addition, whatever interpretation the agency elects to propose in the future, FDA cannot apply it to deny NCE exclusivity to Prepopik, nearly five years after its approval.  As detailed in this letter, and as the agency is well aware, Ferring has relied extensively on FDA’s previous interpretation that “picosulfate” is not an ester.

Depite Ferring’s arguments, FDA issued a 9-page Letter Decision on June 9, 2017 concluding that under the Agency’s structure-centric interpretation of “active moiety” (rather than an activity-based interpretation) (see here), PREPOPIK is not eligible for 5-year NCE exclusivity:

At the time thc Prepopik application was submitted, the Agency determined that sodium picosulfale was a new molecular entity (NME). It was believed that picosulfate was the active moiety of the drug substance sodium picosulfate, and that this active moiety had not been previously approved by FDA. It is not clear from the administrative record how the Agency determined that sodium picosulfate was considered to be an NME, as no documentation of a structural analysis of this active ingredient has been found.  Upon further evaluation of the structure of sodium picosulfate during FDA’s consideration on remand, the Agency determined that sodium picosulfate is the di-sodium salt of a di-sulfate derivative of bis-(p-hydroxphenyl)-pyridyl-2-methane (BHPM) (Figure I). After excluding the salt and ester portions of sodium picosulfate, as FDA’s regulations require, what remains is BHPM.  Therefore, BHPM is the active moiety in sodium picosulfate. BHPM is also the same active moiety as that of the drug substance bisacodyl, which was approved years before Prepopik.
In reaching this decision, the Agency considered whether a di-sulfate derivative is an “ester” derivative from both a scientific and regulatory standpoint. Under standard scientific definitions, picosulfate is an ester of sulfuric acid.  Esters are substances that result from the splitting-out of water from combining an alcohol and an acid, where the acid may be organic (e.g. acetic acid) or inorganic (e.g. sulftric acid).  FDA treats the combined product of an alcohol and sulftiHc acid, like sodium picosulfate, as an ester.  Finally, throughout the NDA for Prepopik, Ferring identified sodium picosulfate as an ester. . . .
FDA regrets this error and apologizes for informing Ferring of this determination almost 5 years after Prepopik’s approval and after litigation related to the exclusivity determination. However, under the applicable regulations, the Agency must evaluate the chemical structure of each drug substance in a drug product.  If a drug substance contains a previously approved active moiety, it is not an NCE.  If none of the drug substances in a fixed-combination is an NCE, then that drug product will not he eligible for 5-year NCE exclusivity.  Upon further review on remand, FDA has concluded that each drug substance in Prepopik contained a previously approved active moiety and none is an NCE.  Thus, Prepopik is not eligible for 5-year NCE exclusivity under either the Agency’s pre-Octoher 2014 interpretation or the new interpretation put forth in October 2014.

As you can imagine, FDA’s decision did not sit well with Ferring. Earlier this month, Ferring filed a Motion to Enforce Judgment with the DC District Court requesting that the court order FDA to recognize NCE exclusivity for PREPOPIK, and characterizing FDA’s exclusivity decision as an end-run around the court’s order:

Here, FDA’s actions on remand directly contravene the central premise upon which this Court’s judgment rested: that sodium picosulfate contained an active moiety (picosulfate) that had never been previously approved. The issue before the Court in this case—the propriety of FDA’s original interpretation of the NCE exclusivity statute as applied to fixed-dose combination products—would have been wholly academic if sodium picosulfate were not, in fact, a novel active ingredient.  By changing its position on this critical issue after the agency lost this case, and after both this Court and Ferring relied on the agency’s original position, FDA has run afoul of both the law of the case doctrine and judicial estoppel principles. FDA’s ill-considered decision also constitutes retroactive rulemaking, violates Ferring’s due process rights, and constitutes arbitrary and capricious agency decisionmaking in violation of the [Administrative Procedure Act].

FDA must file its opposition to Ferring’s motion on or before August 18, 2017, and Ferring must reply on or before September 8, 2017.