A Change in Direction on Stem Cell Policy? It’s About Time 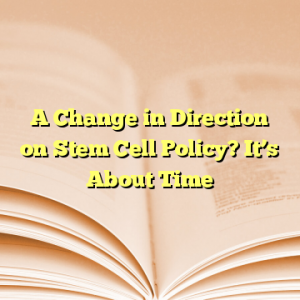 By Mark I. Schwartz –
On Monday, August 28th, FDA announced the outlines of a long overdue policy change on stem cells. Based on Dr. Gottlieb’s statements in the FDA press release, it appears to have two prongs. First, the agency announced a crackdown on stem cell clinics that claim “…that their unproven and unsafe products will address a serious disease, but instead put patients at significant risk.”
To this end, on Friday, August 25th, the U.S. Marshals Service, on behalf of FDA, seized vials of Vaccinia Virus Vaccine (Live) from StemImmune Inc. in San Diego, California. These vaccines were purportedly being administered to cancer patients at the California Stem Cell Treatment Centers in Rancho Mirage and Beverly Hills, California.
According to the FDA press release on the seizure: “…the vaccine was used to create an unapproved stem cell product (a combination of excess amounts of vaccine and stromal vascular fraction – stem cells derived from body fat), which was then administered to cancer patients with potentially compromised immune systems and for whom the vaccine posed a potential for harm, including myocarditis and pericarditis (inflammation and swelling of the heart and surrounding tissues). The unproven and potentially dangerous treatment was being injected intravenously and directly into patients’ tumors.”
In a separate action, on August 24th, the agency issued a Warning Letter to U.S. Stem Cell Clinic Inc., LLC, alleging that the autologous stem cells manufactured from adipose tissue at this clinic were more than minimally manipulated and not intended for a homologous use, thereby rendering the products unapproved new drugs, and biologics requiring licensure under 351 of the Public Health Service Act (PHSA).
According to the Warning Letter, the company’s promotional materials stated that the stem cell product: “…is intended to treat a variety of diseases and conditions, including, but not limited to, Parkinson’s disease, amyotrophic lateral sclerosis (ALS), chronic obstructive pulmonary disease (COPD), heart disease, and pulmonary fibrosis…” among other ailments.
In fact, the Washington Post reports that, in March of 2017, the clinic was the subject of a New England Journal of Medicine article that stated that three women with age-related macular degeneration were blinded, or had their vision badly impaired, after undergoing procedures at the U.S. Stem Cell Clinic which involved injecting stem cells into their eyes.
The issuance of a Warning Letter in these circumstances is not new. The agency has issued several regulatory letters to such facilities over the past several years, though it has rarely taken the subsequent step of initiating litigation, or seizing product, when the facility in question didn’t stop selling the stem cell products after an FDA admonition to do so. It will be interesting to see what further steps, if any, FDA takes in this direction with other such stem cell facilities.
Second, Dr. Gottlieb stated that the agency is developing a “comprehensive and efficient,” science-based policy with the aim of accelerating the proper development of stem cell products. According to the Commissioner, FDA will put forward a new framework on this subject this fall.

This comprehensive policy will establish clearer lines around when these regenerative medicine products have sufficient complexity to fall under the agency’s current authority, and then define an efficient process for how these products should be evaluated for safety and effectiveness. The policies will be set forth in a series of guidance documents that are the result of a public process we have held in recent years. The new policy will build upon the agency’s current risk-based, flexible regulatory framework. It will also serve to implement provisions of the 21st Century Cures Act related to regenerative medicine. The FDA has already held public meetings to inform its thinking in these areas, so much of the agency’s approach is already part of the public record. We’ll continue to work with industry and the scientific community to perfect the process for bringing safe and effective treatments to patients.

At the same time that this regenerative medicine policy will be put forward, FDA will apparently also issue a compliance policy that will give current product developers “…a very reasonable period of time…” to interact with the FDA in order to determine if they need to submit an application for marketing authorization and to come into the agency and work on a path towards approval.
As CBER’s former Deputy Director for Compliance and Biologics Quality (2012-2015), I’m thrilled to see that Dr. Gottlieb is proposing changes to CBER’s thus far unworkable approach to stem cells. The 351 PHSA pathway used for vaccines and related biological products has not shown itself to be an effective regulatory tool for facilities that manufacture cells and tissues on a small scale (often personalized to a patient’s needs), as these firms usually do not have the resources to conduct large-scale trials, and pay significant user fees. This is evidenced by the dearth of approvals of these products and the commensurate dearth of sponsors that appear to be actively conducting clinical trials in this area. In addition, the lack of clarity in the Part 1271 regulations (21 CFR Part 1271 and following), and the draft guidance documents that, at times, appear unhinged from their authorizing regulatory texts, have significantly hindered capital investment and product development in this area.
From the enforcement perspective, the outlines of Dr. Gottlieb’s approach are also salutary, as FDA appears to have taken on paper tiger status because the agency has issued several Warning Letters (as well as numerous untitled letters) in the area of Human Cells, Tissues, and Cellular and Tissue-based Products (HCT/Ps) over many years, and has almost never taken enforcement action against recalcitrant firms that the agency claims continue to violate the law and put the public health at risk (the sole exception to this statement being the case of Regenerative Sciences – see here).
In addition, the Commissioner’s statements regarding enforcement appear to focus on those firms that market unsubstantiated therapies, where those therapies also pose significant risks to the health and safety of patients.  That would appear to exclude amniotic tissue products and the like that have been the subject of the agency’s ire over the past few years (see, for example, the untitled letter to Surgical Biologics from 2013). This would seem to be an equitable resolution to the standoff between CBER and this segment of the HCT/P industry.
Finally, it is also noteworthy that Dr. Gottlieb’s statement, in referencing the criteria under 21 CFR 1271.10(a), never explicitly calls out the fourth criteria, namely, that HCT/Ps should not have a systemic effect and should not be dependent on the metabolic activity of living cells for their primary function. This fourth prong has received much criticism from industry because, read literally, it would preclude most products with viable cells from regulation exclusively under Part 1271.
Indeed, in the proposed rule promulgating the HCT/P regulations (63 FR 26749, May 14, 1998), FDA stated that: “[t]he agency would consider the insertion of pancreatic islet cells, or stem cells into an individual to have a mainly systemic effect…FDA recognizes that some products may have both systemic and structural effects but intends that a product’s primary effect be determinative.” [Emphasis added]
We can only hope that Commissioner Gottlieb’s announcement leads to much needed reforms in the HCT/P arena, particularly in the areas summarized above. Patients and industry participants deserve nothing less. We will, of course, update our readers regarding all FDA developments in this area.