2017: A Banner Year for State Laws on Drug Pricing, Price Reporting, and Discounting 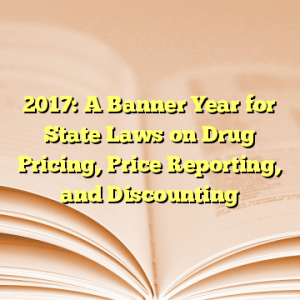 By Alan M. Kirschenbaum & Dave C. Gibbons –
Despite relative inaction on drug pricing at the federal level so far this year, 2017 has been a banner year for state legislation involving pharmaceutical pricing, price reporting, and discounting. Because it is becoming increasingly difficult to keep track of these recent laws, we thought it might be helpful to our readers to identify them and briefly summarize their key provisions.
California
1.    Senate Bill 17 (enacted Oct. 9, 2017) (see our blog post here)

Prohibits prescription drug manufacturer from providing subsidy for an individual’s copayments or other out-of-pocket expenses if a lower cost, therapeutically equivalent (i.e., A-rated) drug is covered under the individual’s health insurance, or if the active ingredients in the drug are available in a lower cost OTC drug. Certain exceptions apply.

Requires drug manufacturers marketing to Louisiana prescribers to report quarterly the current WAC of all of the manufacturer’s drugs marketed in the state.

If an essential or off-patent generic drug exceeding a specified cost threshold had a WAC increase of 50% or greater in a one-year period, or an increase that resulted in an increase of 50% or more in the amount that Maryland Medical Assistance paid within the preceding one-year period, the Maryland attorney may request, and the manufacturer must then submit, specified information justifying the price increase, as well as relevant documents requested by the Attorney General.
The Attorney General may seek an order enjoining price gouging and requiring restitution to state health programs and consumers.

Nevada Department of Health and Human Services (DHHS) must compile a list of drugs “essential for treating diabetes” in Nevada, along with the WAC of each drug on the list (“List #1”), and a second list containing the subset of such drugs whose WAC has increased by a percentage equal to or greater than either the Consumer Price Index, Medical Care Component (“CPI Medical”) during the preceding calendar year or twice the CPI Medical during the preceding two years (“List #2”).

Manufacturers must provide DHHS with a list of sales representatives marketing prescription drugs (not just diabetes drugs) to Nevada practitioners. Annually before March 1, sales representatives who are on the list must provide a report to DHHS of all HCPs that were provided with any type of compensation exceeding $10 in individual value or $100 in aggregate value during the preceding calendar year; as well as information on drug samples provided.

If Medicaid drug expenditures exceed specified annual growth limitations, the NY Department of Health may identify drugs to be referred to the state drug utilization review board for a determination whether a supplemental Medicaid rebate should be requested from the manufacturer, and the target amount for such a rebate. If a target rebate is recommended and the manufacturer does not agree to provide it, the manufacturer must report to the Department information on costs of manufacturing, distribution, research and development, marketing and advertising, prices and rebates offered to purchasers, and other information.

Each year, the Green Mountain Care Board, in collaboration with the Department of Vermont Health Access, will identify 15 drugs on which the state spends significant health care dollars, and for which the WAC has increased by 50% or more over the past five years or by 15% or more over the past 12 months. The Board will provide this list to the Vermont Attorney General (AG), which will require the manufacturer of each drug on the list to provide a justification that the AG determines to be “understandable and appropriate”. The list, and the respective WAC increases, will also be posted on the Board’s web site.

Numerous additional states are considering legislation or regulations affecting drug pricing, price reporting, discounting, and marketing (see, for example, our recent post on a New Jersey proposed regulation limiting gifts to practitioners).  We will continue to report on significant new state laws in this blog.