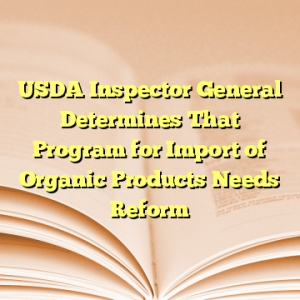 By Riëtte van Laack –
Earlier this year, a front page story in the Washington Post spotlighted several cases of fraudulent organic certificates, raising questions about organic certification practices overseas. Now, a new report by USDA’s Inspector General (IG) report confirms those doubts.
The IG reviewed the process used by the National Organic Program (NOP) of the Agricultural Marketing Service (AMS) to determine equivalence of organic standards used by countries exporting to the United States and compliance of imported products with NOP organic standard. Based on its audit, the IG makes a total of nine recommendations for improvements in four different areas.  In summary, the IG found 1) A lack of transparency of the equivalency determination; 2) A lack of verification of documents of imported organic products from countries that have been determined to have an equivalent system (certificates have been required since 2012 but are not verified); 3) Inadequate control over fumigation of imported organic products at the port (fumigation is inconsistent with organic standards); and 4) Infrequent (not timely) audits of foreign countries’ procedures.
AMS responded to the IG report with agreement and a commitment to carry out the IG’s recommendations. AMS already executed a memorandum of understanding with the Animal Plant Health Inspection Service (APHIS) earlier this year to address communication and notification procedures between the two about fumigation of imported shipments.  For the remaining recommendations, AMS committed to addressing them by July 2018.
The IG report makes no mention of the Washington Post article, or Cornucopia’s subsequent petition to the National Organic Standard Board (NOSB) requesting several actions to strengthen NOP’s control of import of organic product.