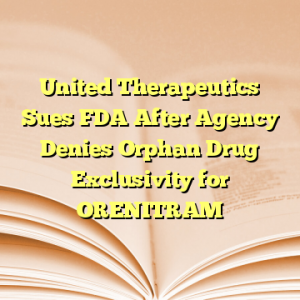 By Kurt R. Karst –
In a Complaint filed in the U.S. District Court for the District of Columbia last week, United Therapeutics Corporation (“UTC”) alleges that FDA unlawfully denied granting the company a period of orphan drug exclusivity upon the Agency’s December 20, 2013 approval of NDA 203496 for ORENITRAM (treprostinil) Extended-release Tablets for the treatment of Pulmonary Arterial Hypertension (“PAH”) (WHO Group 1) to improve exercise capacity. “FDA has unlawfully denied Orenitram its statutorily mandated exclusivity,” says UTC, which is represented by Hyman, Phelps & McNamara, P.C.  “FDA claimed that in order to receive orphan drug exclusivity for the oral formulation of treprostinil for use in the treatment of PAH, UTC ‘must demonstrate that oral treprostinil is clinically superior to the other treprostinil formulations by means of greater efficacy, greater safety or a major contribution to patient care (MCTPC).’”
FDA’s heightened standard for demonstrating clinical superiority to obtain orphan drug exclusivity was at the heart of a September 2012 lawsuit Depomed Inc. (“Depomed”) filed against FDA concerning GRALISE (gabapentin) Tablets (NDA 022544) (see our previous post here).  Depomed prevailed in the lawsuit.  In a September 2014 Memorandum Opinion, Judge Ketanji Brown Jackson of the U.S. District Court for the District of Columbia decided the case on Chevron Step 1 grounds, finding that “the plain language of the Orphan Drug Act requires the FDA to recognize exclusivity for Gralise” (see our previous post here).  The court stated that the statute:

employs the familiar and readily diagrammable formula, ‘if x and y, then z.’ Congress has crafted its command to the Secretary of the FDA in a manner that sets forth two circumstances – a drug that has been designated for a rare disease or condition, and the FDA’s approval of a marketing application for that drug – that, if present, result in a particular consequence: a seven-year period of abstinence regarding marketing approval for other such drugs.

FDA decided not to appeal Judge Jackson’s decision. Instead, FDA published in the December 23, 2014 Federal Register a “clarification of policy” notice in which the Agency addresses the effects of the Depomed court decision (see our previous post here).  In that notice, FDA “double-downed” on the Agency’s pre-Depomed regulations.  In short, FDA says that Judge Jackson’s decision is limited to GRALISE, and that the Agency will continue to apply its clinical superiority regulatory paradigm insofar as orphan drug exclusivity is concerned.
“FDA continues to apply this extra-statutory requirement for proof of clinical superiority despite the fact that the same requirement was expressly rejected by Judge Jackson in Depomed,” says UTC in its Complaint. “Because FDA admitted that Orenitram was properly designated as an orphan drug for the treatment of PAH, the statute dictated that FDA grant Orenitram market exclusivity for seven years from the date of approval,” until December 20, 2020.
UTC alleges that FDA violated the Administrative Procedure Act, saying that FDA’s “denial of orphan drug exclusivity for Orenitram upon approval of the drug for its orphan-designated indication was arbitrary and capricious, an abuse of discretion, exceeds Defendants’ statutory authority, and is otherwise not in accordance with the law.” UTC seeks a declaration that the company “is entitled to seven years of orphan drug exclusivity for Orenitram for the treatment of PAH starting from December 20, 2013,” and, among other things, an order directing FDA “to recognize that UTC is entitled to all benefits of orphan drug exclusivity approval,” and “[i]njunctive relief effectuating UTC’s orphan drug exclusivity by enjoining Defendants from approving any other drug covered by UTC’s exclusivity for the treatment of PAH until December 20, 2020.”