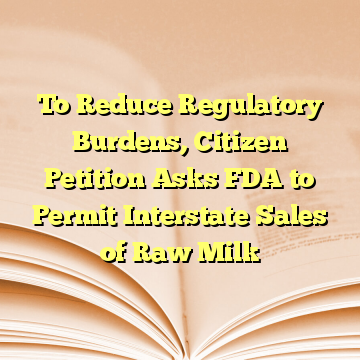 By Ricardo Carvajal –
A citizen petition (Docket No. FDA-2017-P-2626) recently submitted to FDA asks the agency to exercise enforcement discretion with respect to the regulatory prohibition on interstate shipments of milk products that have not been pasteurized (21 CFR 1240.61).  There have been previous petitions asking FDA to allow the interstate shipment of raw milk on a variety of grounds.  This one breaks new ground by citing as support for the requested action several Executive Orders and Memoranda issued by President Trump that are intended to reduce regulatory burdens.
The petition contends that FDA’s enforcement of the regulatory prohibition have been “extremely burdensome, forcing some farmers out of business.”  The petition further contends that “public health can be adequately protected through labeling bearing a warning and safe handling instructions.”  The warning could be one that is required by a state, or where no such state requirement exists, the following:

WARNING: This raw (unpasteurized) milk [cream] may contain disease-causing organisms. Persons at highest risk of these organisms include newborns and infants; the elderly; pregnant women; those taking corticosteroids, antibiotics or antacids; and those having chronic illnesses or other conditions that weaken their immunity.

Ostensibly, proper handling instructions would reduce the risk of foodborne illness by educating consumers on how to pasteurize their own milk.  The petition sets out the following example:

SAFE HANDLING INSTRUCTIONS: To prevent foodborne illness, keep this product refrigerated at 45°F or lower and, prior to consumption, follow the pasteurization process identified below.
Pasteurization Process: (1) Heat milk at 145°F [150°F] for 30 minutes in stainless steel pot; (2) Remove pot of milk from heat and place it in sink or large bowl filled with ice water stirring constantly until milk temperature drops to 40°F; and (3) Store pasteurized milk in a refrigerator at 45°F or lower.

To date, FDA has been steadfast in refusing to allow interstate shipments of raw milk.  This petition aims to find out whether that position is more malleable under the new administration.