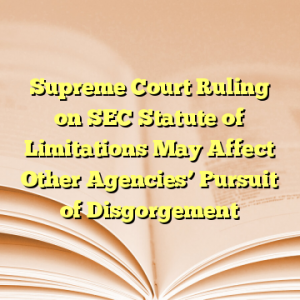 By Jennifer M. Thomas & Gugan Kaur –
On June 5th, 2017, the U.S. Supreme Court issued its opinion in Kokesh v. Securities and Exchange Commission. The Court unanimously reversed the Tenth Circuit’s decision below, and ruled that a five-year statute of limitations for the enforcement of “any civil fine, penalty, or forfeiture” (28 U.S.C. § 2462) applied to the SEC’s claims against Kokesh seeking disgorgement.
Importantly, in reaching its decision in Kokesh the Court found that SEC disgorgement (which requires a defendant to pay back any gains attributable to the wrongful conduct) operates as a penalty under 28 U.S.C. § 2462. The Court also stated that it had not reached the question of “whether courts possess authority to order disgorgement in SEC enforcement proceedings or on whether courts have properly applied disgorgement principles in this context.” (Slip. Op. at 5 n. 3). The Court’s classification of disgorgement as a penalty, and its dicta on the question of whether disgorgement is appropriate under the Securities Exchange Act, has the potential to affect other agencies’ pursuit of disgorgement in enforcement actions.
Like the Securities Exchange Act of 1934 (15 U.S.C. § 78a et seq.) at issue in Kokesh, neither the Food, Drug, and Cosmetic Act (“FDC Act”) nor the Federal Trade Commission Act (“FTC Act”) explicitly authorize disgorgement. Rather, the government has asserted disgorgement authority inherent in FDC Act Sec. 302(a), which awards district courts jurisdiction to restrain most violations of the FDC Act (21 U.S.C. § 332(a)), and Section 13(b) of the FTC Act, which authorizes the FTC to seek preliminary and permanent injunctions to remedy “. . . any provision of law enforced by the Federal Trade Commission….” (15 U.S.C. § 53(b)).
Courts have upheld FDA’s and the FTC’s efforts to seek restitution or disgorgement as a remedy. See, e.g., United States v. Universal Mgmt. Servs., 191 F.3d 750, 763-63 (6th Cir. 1999) (reasoning that both disgorgement and restitution are appropriate under the FDC Act); FTC v. Cardinal Health, No. 15-cv-3031(S.D.N.Y Apr. 20, 2015); FTC v. Gem Merchandising Corp., 87 F.3d 466, 470 (11th Cir. 1996). Disgorgement has become an important enforcement tool for FDA, in particular, although we previously questioned whether remedies such as restitution and disgorgement are appropriate under the FDC Act. See Jeffrey N. Gibbs, John R. Fleder, Can FDA Seek Restitution or Disgorgement?, 58 Food and Drug L. J. 129-47 (2003).
After Kokesh, the government may have more to consider when determining whether to seek disgorgement under the FDC Act or FTC Act. The fact that the Supreme Court declined to address whether disgorgement principles are “properly applied” under the Securities and Exchange Act will likely be cited by defendants in arguing that disgorgement is inappropriate under the other Acts that do not specifically provide for that remedy. Also in light of this new precedent, the Department of Justice may have to reanalyze the question of whether a penalty of disgorgement raises double jeopardy concerns if the government seeks to later bring a criminal prosecution relating to the same conduct. See Application of the Double Jeopardy Clause to Disgorgement Orders Under the Federal Trade Commission Act (Apr. 9, 1998).  On this point, defendants will undoubtedly rely on the Court’s reasoning in Kokesh to argue that disgorgement is so punitive in nature as to qualify as a criminal penalty that should bar later criminal proceedings. Finally, Kokesh has the ancillary consequence of calling into (further) question whether disgorgement payments are tax deductible, an issue that we have previously addressed here. See Internal Revenue Code Sec. 162(f) (fines or penalties are nondeductible); see also IRS OCC Memorandum (Jan. 29, 2016), (disgorgement payments are nondeductible if they are primarily punitive). This is something that both the government and defendants will need to consider with respect to any settlement of an enforcement action that involves disgorgement.