So . . . About That Guilty Plea: The Government Responds to the Decosters’ Petition for Cert 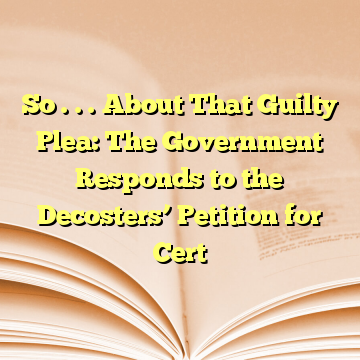 By Jennifer M. Thomas –
We last updated readers on the Decosters’ criminal case in January, when the Decosters timely petitioned the Supreme Court for review of the Eighth Circuit decision upholding their three-month prison sentences under the FDC Act. Last week, the government responded to that petition.
As reported in our previous posts here, here, and here, the Decosters’ case is significant because it tests the limits of the Park doctrine, also known as the “responsible corporate officer” doctrine. The doctrine’s name originated with United States v. Park, 421 U.S. 658 (1975) (here), in which the Supreme Court held that the Federal Food, Drug, and Cosmetic Act (“FDC Act”), 21 U.S.C. § 331, imposes criminal liability on individuals whose corporate position affords them “the power to prevent or correct” violations of that section, even absent “knowledge of, or personal participation in” the violations. Park, 421 U.S. at 670, 676. Park expanded on an earlier Supreme Court decision upholding strict liability for a responsible corporate officer under a different statute in United States v. Dotterweich, 320 U.S. 277 (1943) (here).
By way of brief background, Jack and Peter Decoster, the former owner and CEO, respectively, of Quality Egg, LLC, were each sentenced to three-months imprisonment after pleading guilty to responsible corporate officer violations of the FDC Act. The government acknowledged that it lacked evidence of either Decoster’s knowledge of or participation in the FDC Act violations at issue. However, the U.S. District Court for the Northern District of Iowa found by a preponderance of the evidence at sentencing that the Decosters had acted negligently. The Eighth Circuit, in a split decision, upheld the Decosters’ three-month prison sentences. While the Eight Circuit panel was unanimous that a sentence of imprisonment for a “vicarious liability” offense – absent a finding of some blameworthiness or negligence – would not be permissible, two members of the three-judge panel determined that blameworthiness was either inherent in a responsible corporate officer conviction (Murphy, J.), or had been established in the Decosters’ case by the District Court at sentencing (Gruender, J., concurring).
The government’s brief in opposition to Supreme Court review of the Decosters’ sentences largely reflects Eight Circuit Judge Murphy’s, and in the alternative Judge Gruender’s, views of the law, and argues that the Decosters’ case is not an appropriate vehicle for the Supreme Court to resolve the questions of law raised in their petition.
The government points to the Decosters’ (1) “unqualified” guilty pleas to FDC Act misdemeanor offenses, and (2) agreement to be sentenced based on facts by the district court judge based on a preponderance of the evidence, as dispositive of the issues surrounding their sentencing. The government argues that the Decosters’ three-month prison sentences would have been justified based on the blameworthiness inherent in a responsible corporate officer conviction under the FDC Act, regardless of any fact-finding by the District Court. But the Decosters’ prison sentences were not based purely on their guilty pleas for responsible corporate officer violations of the FDC Act, and the District Court did find additional facts about the Decosters’ acts and omissions relating to the FDC Act violations at issue. The government emphasizes that in their guilty pleas, the Decosters agreed to be sentenced based on facts determined by the District Court judge by a preponderance of the evidence.
Finally, in response to the Decosters’ novel argument that the Park doctrine itself should be invalidated in its entirety, the government argues that their guilty pleas, and failure to contest the statutory basis for their convictions before the district and circuit courts, preclude Supreme Court consideration of that issue.
Despite the government’s opposition, the Decosters already have the support of multiple amici urging the Court to review their prison sentences. The Washington Legal Foundation and the National Association of Criminal Defense Lawyers both filed amicus briefs in support of the Decosters’ petition. If the Eighth Circuit briefing is any indication, additional influential amici may follow. Stay tuned – we will keep you posted on the Court’s disposition of the Decosters’ petition.