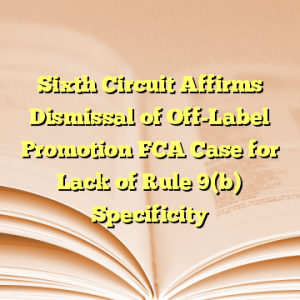 By Andrew J. Hull –
The Sixth Circuit recently dealt another blow to relators seeking damages under the False Claims Act (FCA) based on allegations of off-label promotion. In a 2-1 decision, the court, in United States ex rel. Ibanez v. Bristol-Myers Squibb Co., affirmed the district court’s dismissal of relators’ (the government declined to intervene) second amended complaint and denial of relators’ motion to file a third amended complaint because, inter alia, relators could not plead a false claim with the specificity required under Federal Rule of Evidence 9(b).
The court affirmed the dismissal of FCA conspiracy counts, explaining that, while alleged conduct involving off-label promotion to increase the number of drug prescriptions “may be condemnable” (if true), such an alleged plan “does not amount to a conspiracy to violate the FCA.” The court held:

Even if it was foreseeable that somewhere down the line off-label prescriptions of [the drug] would be submitted to the government for payment, that foreseeable consequence does not subsume the aim of the agreement. In other words, to adequately allege an FCA conspiracy, it is not enough for relators to show there was an agreement that made it likely there would be a violation of the FCA; they must show an agreement was made in order to violate the FCA.

Slip Op. at 10.
The court’s discussion regarding the heightened pleading standard under Rule 9(b) is also of particular note to drug and device manufacturers facing FCA complaints alleging off-label promotion. The court noted that pleading with specificity in such cases is “awkward” and requires a specific representative example demonstrating the following three elements:

The physician to whom manufacturer improperly promoted the product must have prescribed the medication for an off-label use;
The patient must have filled that prescription; and
The filling pharmacy must have submitted a claim to the government for reimbursement of that prescription.

An exhibit identifying reimbursement for prescriptions paid by state Medicaid for pediatric patients before the drug had a pediatric indication (the court noted that nothing connected the prescribing physicians to defendants’ alleged improper promotion).
Exhibits showing that a patient obtained prescriptions for an off-label use from a pharmacy (the court explained that there was no corresponding allegation that the prescriptions were presented to the government for payment, and no link to defendants’ alleged improper promotion).

The dissent rejected the notion that relators had not pled with sufficient specificity in their third amended complaint. Instead, the lone-dissenting judge noted that other circuits have found specificity when the relator alleges “particular details of a scheme to submit false claims” along with “reliable indicia that lead to a strong inference that claims were actually submitted.” Id. at 21. The judge wrote: “I cannot agree with the . . . majority opinion because the relators have pled facts sufficient to satisfy Rule 9(b) by identifying specific claims and supplementing those identifications with personal knowledge and statistical evidence.” Id. at 23.The Rule 9(b) pleading standards vary by circuit, particularly as to whether inferences supported by “reliable indicia” can constitute sufficiently plead allegations as they apply to CMS-related claims involving alleged violations of the FDC Act and FDA’s regulations (see our previous post here). The lack of a consistent standard among the circuits invites forum shopping by relators’ counsel and would benefit from Supreme Court review.