Should Free Speech Protections Include an Exception for Exclusivity-Protected Information? 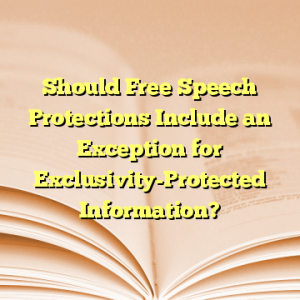 By Kurt R. Karst –
As we previously noted, the intersection of exclusivity and off-label promotion issues is not common, but quite an interesting issue nevertheless. The intersection of these issues was raised earlier this year when Egalet Corporation (“Egalet”) issued a press release saying that the company had received correspondence from FDA stating that the Agency “‘does not object’ to Egalet’s stated plans for distribution of materials [concerning the company’s ARYMO ER (morphine sulfate) Extended-release Tablets] that are ‘based on the intranasal abuse-deterrence data in its original NDA submission’ if the communications are directed only to healthcare professionals, include appropriate disclosures and are otherwise truthful and non-misleading.”  You see, although Egalet conducted intranasal route of abuse clinical studies with ARYMO ER (approved under NDA 208603), FDA determined that 3-year exclusivity granted to Inspirion Delivery Technologies, LLC’s (“Inspirion’s”) MORPHABOND (morphine sulfate) Extended-release Tablets (NDA 206544) – for which Daiichi Sankyo, Inc. (“Daiichi”) holds U.S. marketing rights – prevented the Agency from approving ARYMO ER with labeling describing abuse-deterrence via the intranasal route of abuse.
FDA’s comments to Egalet have apparently bled over into comments submitted to the Agency by AbbVie Inc. (“AbbVie”) and Daiichi concerning a January 2017 draft guidance, titled “Medical Product Communications That Are Consistent With the FDA-Required Labeling — Questions and Answers” (Docket No. FDA-2016-D-2285).
According to AbbVie’s comments, “beyond-the-label communications” are justifiably restricted in one particular narrow circumstance:

A flexible approach to beyond-the-label communications . . . will serve the public interest by enabling more informed coverage and treatment decisions. Providing these additional avenues for manufacturer communications also furthers First Amendment values by respecting the rights of manufacturers to engage in truthful and nonmisleading speech about their products. . . .  In one narrow situation, however, we believe a different conclusion is warranted: that a specific legitimate government interest justifies appropriate limits on certain beyond-the-label communications.  This narrow situation involves the federal statutory scheme in place to incentivize biopharmaceutical industry research and development efforts through grants of non-patent regulatory exclusivity to innovative sponsors, in particular circumstances. . . .
In very narrow circumstances, however, beyond-the-label communications could undermine these sorts of regulatory exclusivity granted to a given company. This could happen if an innovator’s product were approved for an unprotected use but also for a supplemental use protected by orphan exclusivity or, in the case of a new drug, three-year exclusivity.  In these situations, FDA might approve another company’s product for the unprotected uses but allow that company to carve out from its labeling the protected uses. That other company might then choose to promote its drug for the protected use (subject to infringement claims under any applicable patents), which could lead to sales for the protected use—directly undermining the exclusivity.  Appropriate regulation of beyond-the-label communications in these circumstances would directly advance the government’s legitimate interest in preserving incentives for innovation made possible by exclusivity.  Indeed, courts that have upheld FDA’s authority to approve products with labeling carve-outs have assumed that only the innovator could promote for the protected use.  Moreover, no less restrictive alternatives (such as a disclaimer) would be effective in preserving the incentive.  The constitutional analysis in these narrow circumstances thus leads to a different result. In this specific situation, then, we believe FDA could justify a speech restriction.

Although AbbVie does not identify a particular product, the company’s focus on orphan drug exclusivity may be a veiled reference to AbbVie’s HUMIRA (adalimumab). In September 2016, FDA approved Amgen, Inc.’s (“Amgen’s”) AMJEVITA (adalimumab-atto) (BLA 761024), the first biosimilar version of HUMIRA (see our previous post here).  Amgen’s AMJEVITA was approved with labeling omitting information on uses that are protected by periods of orphan drug exclusivity applicable to HUMIRA.
Comments submitted to FDA on the draft guidance by Daiichi are specific to the off-label use/exclusivity controversy:

Data exclusivity thus derives all of its value from the scope of the labeling for the drug. If the Draft Guidance were interpreted to permit a competitor to communicate data about a condition of use of a product with the same active moiety for which another company has data exclusivity, then the value of the data exclusivity to the original innovator would be severely undermined, if not destroyed.
In these circumstances, [Daiichi] believes that the First Amendment analysis is different than in the typical communication with a healthcare professional. . . . Where exclusivity rights are not at stake, the Central Hudson analysis weighs in favor of protecting truthful and non-misleading communications to sophisticated health care professionals about medicines and puts the burden on the government to show that it has important interests that the speech regulation directly advances in a narrowly tailored manner. . . .  Where intellectual property rights, such as exclusivity rights, are at stake, the prohibition on truthful and non-misleading communications directly advances the government’s interest in protecting those rights and preserving incentives for innovation. . . .  Allowing a competitor to communicate the infringing data, by itself, causes immediate competitive injury and undermines the carefully framed statutory exclusivity framework.  No amount of disclosure can cure that infringement.  Thus, the only alternative in this narrow circumstance is to restrict the speech. . . .
FDA should thus make clear that the guidance provided does not apply to any communications that would infringe on the intellectual property rights of another company, including data exclusivity rights. In those circumstances, the only rule that would be consistent with statutory mandates is to restrict the communication, even if the communication is truthful and non-misleading.

Neither the Pharmaceutical Research & Manufacturers of America (“PhRMA”), nor the Biotechnology Innovation Organization (“BIO”), has yet entered the fray in any appreciable way.  BIO’s comments to FDA on the draft guidance only briefly mention exclusivity:

BIO does not believe that FDA’s modernizing its current framework to appropriately broaden communications will detract from the sound incentives for pursuing label expansions. This is due to the value of having information on the FDA-approved labeling, the simplicity of ‘on label’ detailing, and incentives such as regulatory exclusivity and eligibility for reimbursement.

Whether FDA will address off-label promotion vis-à-vis exclusivity in another version of the guidance is unclear; however, the Agency may be hesitant to do so in detail given the controversial nature of the topic and the possibility of litigation over the matter.