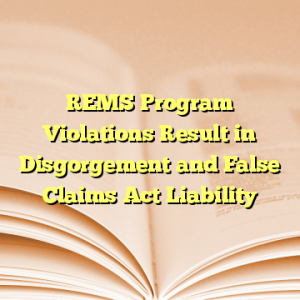 By Anne K. Walsh –
In a settlement noteworthy to any company with a drug subject to a Risk Evaluation and Mitigation Strategy (“REMS”), on September 5, 2017, the U.S. announced a multi-million dollar civil settlement with Novo Nordisk for an alleged violation of REMS requirements for its drug Victoza (liraglutide injection).
Under the Food and Drug Administration Amendments Act (“FDAAA”), Congress granted FDA authority to require a REMS as part of the approval of a new product, or for an approved product when new safety information arises, to manage a known or potential serious risk associated with a drug. The REMS program is well-known to impose stringent requirements on manufacturers to ensure that the benefits of a drug or biological product outweigh its risks. And FDAAA amended the FDC Act such that a drug is deemed to be misbranded for a failure to comply with the REMS requirements:

The $58 million civil settlement by Novo Nordisk involves two components. The first component resolves the FDC Act misbranding violation and resulted in disgorgement of $12.15 million under FDA’s equitable authorities (more on disgorgement here). The Complaint details the allegations regarding Victoza, a drug approved in 2010 to treat Type II diabetes. At the time it was approved, FDA required a REMS to mitigate the potential risk in humans of a rare form of cancer called Medullary Thyroid Carcinoma (MTC). According to the Complaint, between 2010 and 2012, some Novo Nordisk representatives failed to comply with the REMS by giving information that the FDA-required message was “erroneous, irrelevant, or unimportant.” Complaint ¶ 24. And after FDA modified the REMS in 2011 to increase awareness of the risk, the Complaint alleges that Novo Nordisk failed to comply with the REMS modification and tried to obscure the risk.
The second component of the civil settlement involves a payment of $46.5 million to resolve False Claims Act liability. The FCA settlement spans a longer period of time (2010-2014), and resolves allegations that the sales force created a false or misleading impression about the risk of MTC and promoted the off-label use of Victoza for patients who did not have Type II diabetes. The FCA settlement ends seven lawsuits filed by private parties against Novo Nordisk in the District of Columbia. It is not yet known the amount that each of the whistleblowers will receive.
This settlement represents another example of an FDA regulatory violation resulting in False Claims Act liability, a slippery slope that could mean that even inconsequential regulatory violations could result in multi-million dollar payments. This very issue is the subject of a petition before the Ninth Circuit.