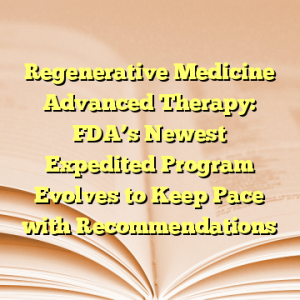 By James E. Valentine & Frank J. Sasinowski –
If you read our blog, you already know that the 21st Century Cures Act included a provision that created the Regenerative Advanced Therapy designation program, or “RAT” (see our previous coverage of the Act here).  You will also already know that the Center for Biologics Evaluation and Research (“CBER”) put forth its interpretation of the RAT designation program (see our previous coverage here).  What you may not know is that since that time, we’ve been busy making recommendations that we were hoping would be heard so that either FDA or Congress could improve the program.  Luckily, we have a couple changes to report.
A Name Change
Congress didn’t do FDA or industry any favors with the naming of the new designation program.  Nobody was excited to say their biologic product is a RAT! In HP&M’s January 12th webinar on the drug and biologics-related provisions of the 21st Century Cures Act, Frank Sasinowski made the pitch to rename the acronym.  Specifically, he proposed a reordering of the acronym lettering to ART, or Advanced Regenerative Therapy (see webinar slides 50-55 here).  While FDA didn’t initially propose to change the name of this designation program, sometime in early 2017 the Agency heeded this warning and changed the acronym to RMAT, or Regenerative Medicine Advanced Therapy (as reflected on CBER’s webpage here).  While the new name is a little redundant, it does the trick.
Inclusion of Gene Therapies
On a more substantive note, the 21st Century Cures Act language also left many of us in the advanced regenerative therapy industry scratching our heads.  The statute defined this new category of drugs to include cell therapies and therapeutic tissue engineering products, but not gene therapies.  Many of us felt that this must have been an oversight in the drafting of the provision, and that the legislative intent was surely to include gene therapies.  However, the webpage CBER created to implement the designation program did not add any clarity on this topic.  To thwart any differences in statutory interpretation between stakeholders, and to ensure predictability in the application of the designation, at the Rare Disease Congressional Caucus briefing held on March 2nd, Frank Sasinowski recommended to members of Congress and their staffs to make a technical amendment to explicitly include gene therapies in the definition of advanced regenerative therapy (see previous coverage of this briefing and Sasinowski’s slides here).
Congress did not take such action, despite having a chance to add a technical amendment with the passage of the FDA Reauthorization Act (“FDARA”) over the summer (see our firm’s detailed summary and analysis of FDARA here).  Instead, on August 28, 2017, FDA Commissioner Scott Gottlieb, M.D. announced, as part of a speech on oversight of stem cell therapies and regenerative medicine, the Agency’s “plan to include certain gene therapy products that permanently alter tissue and produce a sustained therapeutic benefit as part of the products that will meet the definition of being eligible to come under the pathway enabled by RMAT” (see the full statement here).  This new policy provides clear guidance that the door is open for RMAT designation to gene therapies.