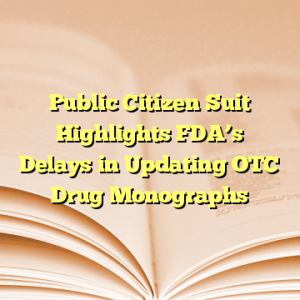 By Jennifer M. Thomas –
Public Citizen sued FDA last week, in an effort to force Agency action on the tentative final monograph (“TFM”) for OTC oral health care drug products. That TFM currently permits the marketing of OTC benzocaine oral health care drug products labeled for use to relieve infant teething pain. On July 28, 2014, Public Citizen petitioned FDA to (1) reopen the OTC oral health care drug monograph, (2) revise the labeling requirements for benzocaine products to preclude indications for infant teething pain, and (3) require warning labeling on benzocaine products about the risk of methemoglobinemia, a rare but potentially serious blood disorder that can be caused by exposure to benzocaine. Effects of methemoglobinemia can include developmental delays, intellectual disabilities, seizures, or coma, among other things. FDA has yet to act on Public Citizen’s petition.
FDA’s TFM for oral healthcare drug products was issued in 1991. At that time, FDA’s advisory review panel “recognized that benzocaine could be linked to methemoglobinemia and that infants were more susceptible to that condition” (Compl. ¶ 16), but determined that a warning label was not necessary. According to Public Citizen, data on the link between benzocaine’s use as an anesthetic in teething infants and development of methemoglobinemia continued to accumulate after the TFM was published. So much so, that between 2003 and 2014, FDA “issued multiple safety announcements related to the risk of methemoglobinemia with OTC benzocaine products” based on adverse events reported to the agency. Id. ¶ 20, see also, e.g., FDA Consumer Update. In 2014, FDA also encouraged manufacturers to voluntarily include a methemoglobinemia warning on their benzocaine products, even though such a warning would fall outside the label specifications set forth in the TFM. Yet, FDA did not grant or deny Public Citizen’s petition – stating in February 2016 that it was unable to do so in light of the “significant/complex issues [raised by the petition] requiring extensive review and analysis by Agency officials.” Compl. ¶30.
Public Citizen’s suit faces an uphill battle, given courts’ traditional reluctance to force FDA’s hand with respect to either the substance or the timing of regulatory decisions grounded in science. While the gravity of this issue and FDA’s administrative record are factors in Public Citizen’s favor, the complaint lacks examples of benzocaine products currently on the market bearing indications for use in infant teething, and does not allege that Public Citizen’s members or their children are exposed to infant teething products containing benzocaine. Thus, FDA and the court might reasonably question Public Citizen’s claim to standing in the case.
Public Citizen’s lawsuit also highlights the significance of FDA’s ongoing discussions with industry about updating the OTC drug monograph program to make it more efficient, and the need for an OTC drug monograph user fee program. From that perspective, FDA and proponents of a user fee program may welcome litigation that draws public attention to the Agency’s lack of necessary resources to review and update OTC drug monographs.