Pharmaceutical Manufacturing in Puerto Rico after Maria– Where does it go from here? 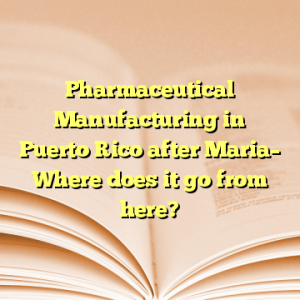 By Mark I. Schwartz –
Puerto Rico has been a hub of pharmaceutical manufacturing for some time, but in the aftermath of hurricane Maria (and Irma), that has changed – at least for now. Without power in most of the island, but more importantly, without employees who can get to work on a regular schedule, much of Puerto Rico’s pharmaceutical manufacturing has been idled, and is likely to continue that way for some time.
According to the Bureau of Labor Statistics, pharmaceutical manufacturing represented 72% of Puerto Rico’s exports in 2016 ($14.5 billion), and the sector accounted for 25% of the total of U.S. pharmaceutical exports to the rest of the world. By comparison, California was next in line, but had only half as much in the way of pharmaceutical exports.
Puerto Rico has more than 50 registered pharmaceutical facilities on the island, producing sixteen of the top twenty selling drugs in United States, and seven of the top ten selling drugs globally.
Its status as hub of pharmaceutical and biotech manufacturing has its origins in its tax favored status under the Internal Revenue Code, which, for decades, incentivized U.S. based manufacturers to send profits from the island’s plants to their stateside parent companies without having to pay federal taxes. In 1996, President Clinton signed into law an amendment to the Internal Revenue Code, phasing it out over ten years.  Several plants have shuttered since the phase out of this tax favored status, and with the devastation caused by hurricane Maria, analysts worry that several more will never reopen for business.
Recognizing the impact that the shut-down of a large segment of the U.S. pharmaceutical industry can have on the supply of drugs to consumers (and hence on public health), FDA Commissioner Gottlieb has issued two statements (here and here) in recent days, emphasizing the importance of Puerto Rico to the continued success of the U.S. pharmaceutical industry (as well as on the importance of the pharmaceutical industry to Puerto Rico’s economic health), and on the efforts that are being made by FDA to identify and bring the island’s pharmaceutical resources back into operation.

Leading up to the storm, our team of shortage experts worked to identify and coordinate with companies that have manufacturing facilities in Puerto Rico to assess the potential impacts on their facilities to avoid—whenever possible—shortages of critical medical products. During and following the storm, we have worked with pharmaceutical and medical device firms to figure out whether manufacturing facilities were damaged, or if they were still operational and could continue to function on generator power. Since Friday, we have undertaken swift and extensive efforts to prevent or limit the loss or shortage of multiple drugs critical to American patients due to the challenges related to refrigeration, storage and transportation. The agency has been working closely – throughout the weekend and into today – to relocate products in coordination with our federal and local government colleagues and pharmaceutical companies.

The Commissioner also stated that he has directed the creation of a hurricane shortages task force that will be asked to identify potential issues and creative solutions to impending drug shortages, as the agency is aware of several other situations where there may be critical shortages “…if we don’t find a path for removal [of the drug products from Puerto Rico] or ways to get production back up and running.”
For all these reasons, we all hope that Puerto Rico’s recovery is swift and comprehensive.