Orphan Drug Designation Requests and Designations Dipped in 2018, But Orphan Approvals Are Up Again! 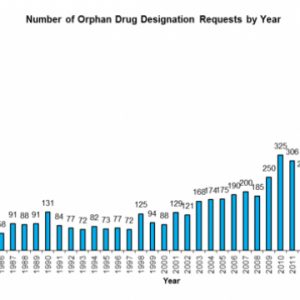 Okay, okay . . . .  It’s now a month after Rare Disease Day (on which Hyman, Phelps & McNamara, P.C.’s own Frank J. Sasinowski took part in some of the festivities).  We’re a little late this year in pulling together and posting on the past year in orphan drug designation requests, designations, and approvals; but better late than never, right?  And, in any case, having delayed pulling together this post, we now have the benefit of some rather interesting statistics and information from FDA’s Fiscal Year 2020 Justification of Estimates for Appropriations Committees (i.e., FDA’s FY 2020 Budget Justification), which FDA Commissioner Dr. Scott Gottlieb announced on March 19, 2019 (see pages 102-103 and 113-119 in particular on the Office of Orphan Products Development (“OOPD”)).

Where FDA really shined in 2018 was with orphan drug approvals.  As one article headline stated: “Orphan drugs dominate FDA’s record-breaking year”.  That’s true: FDA approved 91 orphan drugs in 2018, which is 10 more than the record set in 2017.  It’s important to note, however, that orphan drug approvals include not only approvals of NDAs for new molecular entities and BLAs for original biological products, but also applications approved for new orphan uses of previously approved drugs and biologics (e.g., “repurposed drugs”).  Since 1983, FDA has granted more than 770 orphan drug approvals.  (Though, at the same time we note that about 93% of rare diseases still have no approved therapies.)

Below are three tables—one for each metric we track—showing the year-by-year numbers since 1983, and a fourth table with combined figures.  The numbers are largely based on information from FDA’s Orphan Drug Designations and Approvals Database. 2018 also saw a growing amount of controversy and criticism over orphan drugs (largely unjustified we think) as part of the larger drug pricing debate.  As a result, numerous articles and reports were published last year.  Here’s a list of some of them:

These and other concerns about 7-year orphan drug marketing exclusivity perhaps spurred FDA to include the following passage in the Agency’s FY 2020 Budget Justification:

FDA will also conduct assessments of current orphan drug incentives, including market exclusivity, to inform FDA’s policy framework around primary and secondary drug indications.  Included would be a better understanding of how FDA could best incentivize more drug development for ultra-rare diseases.  The requested funding for this initiative will enable FDA to implement advances to support the public health mission of the Agency.

Where we’re still a bit mystified, however, is with respect to OOPD funding.  OOPD’s public health role and importance to FDA’s success cannot be understated.  In fact, here’s how it is described in the FY 2020 Budget Justification:

Despite a significant and growing workload and a critical role to play at FDA, OOPD’s funding has for years been (and will likely remain) flat at a little over $29 million.