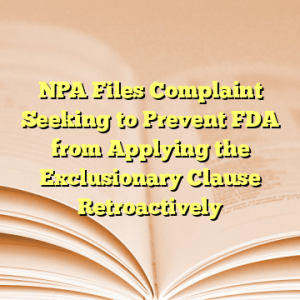 On December 7, 2021, the Natural Products Association (NPA) filed a complaint seeking an injunction based on FDA’s actions excluding N-acetyl-L-cysteine (NAC) from the definition of dietary supplement.  At issue is FDA’s interpretation of the “exclusionary clause,” section 201(ff)(3)(B)(ii) of the FDC Act, which among other things excludes from the dietary supplement definition articles that are approved as new drugs, or authorized by FDA for investigation for therapeutic uses for which “substantial clinical investigations have been instituted and for which the existence of such investigations has been made public” and which were not “marketed as a dietary supplement or as a food” before such approval or authorization.  Specifically, the issue is whether this provision applies to bar dietary supplements, such as NAC, that were on the market before the enactment of the Dietary Supplement Health Education Act (DSHEA), in 1994, which added this exclusionary clause into the FDC Act.

In July 2020, FDA sent warning letters (WLs) to seven companies about products containing NAC.  The main reason for the WLs seemed to have been the companies’ impermissible use of drug claims that NAC was effective against hangover.  However, FDA also asserted that NAC is excluded from the dietary supplement definition because NAC has  been approved as a drug in 1963 and FDA was not aware of evidence of the marketing of NAC before that date.  FDA did not consider that NAC was legally marketed as a dietary supplement before 1994.

Although FDA had previously questioned or suggested that NAC was excluded, FDA had not taken any enforcement action against NAC supplements during the more than 25 years that they have been marketed as a dietary supplement.

In December 2020,  the Council for Responsible Nutrition (CRN) sent a letter asserting, among other things, that NAC had been on the market before DSHEA was enacted and, therefore, was a “grandfathered” ingredient.  CRN argued that the exclusionary clause in DSHEA was not intended to apply to such grandfathered ingredients but instead was intended to bar new dietary ingredients which would be first introduced into the US market after the enactment of DSHEA.  Absent a specific provision in DSHEA, the exclusionary clause would not apply retroactively; the passing of DSHEA did not affect the status of ingredients on the marketed prior to DSHEA.  FDA did not respond to the letter.

Six months later, in an effort to get FDA to address the issue, CRN submitted a Citizen Petition (CP) again asking that FDA reconsider its position that NAC is excluded.   Several months later, NPA filed its own CP  making the same arguments.

In November 2021, FDA issued tentative responses to the two CPs, here and here.  In these responses and in the Constituent Update , FDA requests information on the earliest date that NAC was marketed as a dietary supplement or as a food, the safe use of NAC in products marketed as a dietary supplement, and any safety concerns.  Much to the frustration of the industry, the tentative response did not address the legal issue crucial to the future of NAC, i.e., that NAC is a legal (grandfathered) dietary ingredient because DSHEA does not apply retroactively to exclude dietary supplements that were on the market before the enactment of the law.  FDA merely indicated that it was still considering that issue.

As readers of this blog may know, FDA is not required to provide a substantive response to a CP within a specific time and it may take years before FDA issues a response (In fact, HPM submitted a CP in 2000 to which FDA has yet to respond).  Since FDA’s statements about NAC as dietary supplement had resulted in several retailers barring the sales of NAC supplement, getting to FDA to address this issue was an urgent matter.  Therefore, NPA filed a lawsuit.  NPA’s complaint includes essentially the same arguments and facts as the Citizen Petitions.  In addition, it points to statements by an FDA Office of Criminal Investigations agent in an application for search warrants that NAC is excluded from the definition of dietary supplement.  NPA points to these and subsequent statements by FDA in the prosecution as final agency action re NAC which can be challenged in court.

NPA asks the court to declare that the exclusionary clause does not retroactively apply to the dietary supplement NAC and seeks a preliminary and permanent injunction prohibiting FDA from taking any regulatory action against manufacturers, sellers or distributors of NAC based on the claim that the drug exclusion prohibition is retroactive.

There are interesting procedural and substantive issues in this case, both with respect to NAC specifically and with respect to FDA regulation generally.  First, what constitutes, reviewable agency action?  Here, FDA has not issued a rule or other formal administrative action, but it has—in what are purportedly non-final actions—pressed its interpretation.  Seemingly that should give a plaintiff standing.  Second, was DSHEA intended by Congress to apply retroactively?  As a matter of statutory construction, absent explicit language, statutes are generally intended to apply prospectively.  Third, even if Congress intended DSHEA to apply retroactively, does the Constitution permit it?  The Ex post facto clause of the Constitution generally makes it unconstitutional to have a law retroactively impose penalties. We will be monitoring developments in this litigation.