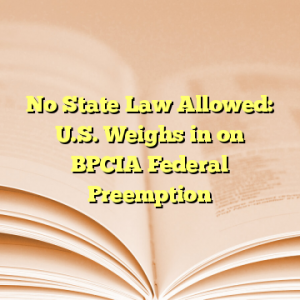 By Sara W. Koblitz –
After this year’s unanimous Supreme Court decision in Amgen v. Sandoz was remanded to the Federal Circuit (see our previous post here), that Court is now in the midst of addressing Biologics Price Competition and Innovation Act (“BPCIA”) state law preemption. In August, the parties filed supplemental briefs.  Amgen argued that Sandoz’s noncompliance with the BPCIA was unlawful and wrongful, and therefore sufficient for claims under California state law. Amgen argued that Sandoz waived any preemption defense and that the BPCIA does not preempt state law remedies for failure to comply.  Sandoz, conversely, contended that Amgen’s state law claims are preempted under the BPCIA and fail on the merits anyway, as there was no violation of federal or state law.
On Monday, the federal government jumped into the fray. The U.S. submitted an Amicus Brief arguing that the BPCIA preempts state law. Based on the tenet that the “federal statutes occupy the field of federal patent litigation,” states are precluded from regulating in the space.  The government’s focus is on patent litigation (not the more general patent law), explaining that federal courts have exclusive jurisdiction over claims arising under patent laws.  Field preemption is reinforced by the comprehensive regulation of biosimilars in the BPCIA.
The government also invokes a conflict preemption argument. Even if Sandoz “unlawfully” refused to exchange aBLA information with Amgen, a state law injunction would obstruct BPCIA’s purposes and objectives by depriving “the applicant of a choice [of participating in the information exchange] the BPCIA was designed to provide.”  It would additionally undermine the BPCIA litigation timetable.
The federal government has made its position pretty clear here: states should stay out of this federal issue.