New Legislation Seeks Limits on Opioid Prescriptions for Acute Pain, But Will it Reduce Opioid Abuse? 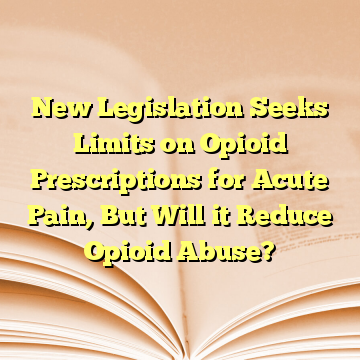 By James R. Phelps –
The scourge of opioid addiction has received considerable attention for some time, and now legislation is proposed to address the overuse of addictive prescription opioids: Senate bill 892, the Opioid Addiction Prevention Act of 2017. The proposed legislation defines conditions of acute pain and tells physicians how they may prescribe for them.
This bipartisan bill, offered by Senator John McCain (R-AZ) and Senator Kirsten Gillibrand (D-NY), would require physicians who prescribe opioids to certify, in order to secure registration or renewal of registration under the Controlled Substances Act, that they would, to treat acute pain, not write a prescription for more than a 7-day supply of an opioid. Further, the bill prohibits the refill of such prescriptions for acute pain. It does appear that the bill would not prohibit a physician to treat acute pain that lasts for more than 7 days by issuing serial 7-day,but nonrefillable prescriptions.
If there are other limitations on prescribing for acute pain imposed by the states, those limitations would be given force by this the bill.
“Acute pain” is defined as “pain with abrupt onset and caused by an injury or other process that is not ongoing.” The bill excludes from the meaning of “acute pain” the following: “chronic pain,” “pain treated as part of cancer care,” “hospice or other end-of-life care,” or “pain treated as part of palliative care.” Further, the prescribing limitations of the bill do not apply to prescriptions of Schedule II, III, or IV opioids intended and used to treat addiction.
Navigating treatment of patients in compliance with federally-prescribed diagnoses of pain will be the responsibility of the physicians. The bill defines acute pain as pain from a particular source — an injury or other process that is not ongoing — but it makes no attempt to say how much the pain must hurt to be “acute;” that is evidently left to the doctor. Further, when a “process is not ongoing” could be hard to know — consider the pain following surgeries; if the process of healing is “not ongoing” pain, then the scripts need to be issued every 7 days.
Given that the bill does not limit the number of 7-day scripts the doctor might write, it can be assumed that its intent is to require weekly patient/doctor interaction. The need for that, and its effect upon the patients and their physicians, needs study; perhaps the medical profession can best determine what is good medical practice.
The bill gives a clear signal that members of Congress are deeply concerned about opioid addiction, and they are to be commended. How much it might do to reduce the abuse of opioids is questionable.