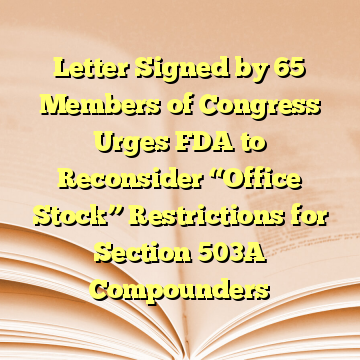 By Karla L. Palmer –
A recent letter from 65 members of Congress to FDA’s Commissioner Gottlieb has caused a bit of a buzz in the pharmacy compounding world. The letter, dated May 23, 2017, expresses the Congressional signers’ “strong disappointment” with FDA’s recently issued Final Guidance for Industry titled, “Prescription Requirement under 503A of the Food Drug and Cosmetic Act.” The Final Guidance, published on December 30, 2016 (see our previous post here), addresses the so-called “prescription requirement” in FDCA Section 503A, including FDA’s policies requiring compounding only after the receipt of a prescription for an identified individual patient, limited compounding before the receipt of such a prescription (referred to as “anticipatory compounding”), and the prohibition on compounding for office use (referred to as “office stock”).  FDA has consistently asserted since the passage of the 2013 Drug Quality and Security Act that, in order for compounders to obtain Section  503A’s exemptions from new drug, adequate directions for use and cGMP requirements, each compounded formulation must be prepared for an individually identified patient pursuant to a prescription or order, and the compounder may not engage in compounding for office stock.  Proponents of those that believe state-licensed pharmacies should be permitted to engage in compounding for office stock if it is permissible under state law assert that Congress’ plain use the term “distribution” in Section 503A and various Congressional statements prior to and at the time of the Act’s enactment demonstrate Congress’ clear intention to permit state-licensed pharmacies to engage in compounding for office stock.
The bi-partisan letter (led by Rep. Chris Stewart (R-Utah) and Rep. Buddy Carter (R-Ga.), urges FDA to rethink its decision restricting pharmacies from engaging in compounding for office stock. The Letter  states that FDA’s policies are contrary to the plain language of Section 503A as amended by the DQSA.  In addition,  it asserts that FDA ignored congressional intent, stakeholder input, and clear directives in FY 2016 funding legislation about office use compounding, and added to the Final Guidance language that attempts to redefine the terms “dispense” and “distribute,” ignoring their commonly accepted “definitions both in existing law and in pharmacy practice.”  The Letter accuses FDA of “doubling down” on FDA’s “misinterpretation of the statute and will further exacerbate the patient access problems as more state licensed and compliant pharmacies are forced to cease compounding office-use medications to the providers in their communities who rely on them.”
Calling the Final Guidance “regulatory overreach,” the Letter lastly seeks the rescission of the Final Guidance, and requests FDA to issue a proposed rule that adheres to “congressional intent” and “plain language of the underlying statute.”