Just the Stats, Ma’am: FDA Increases Inspections in Foreign Countries, Resulting in a Higher Rate of Enforcement Actions than Imposed on U.S. Facilities 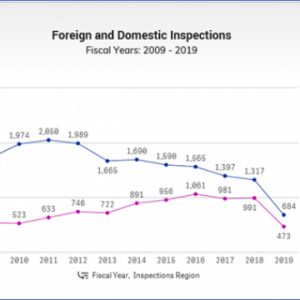 The last time we blogged on news from a recent pharmaconference.com industry conference about current Good Manufacturing Practice (“GMP by the Sea,” agenda linked here), we provided some cute references to corn pudding recipes (blogpost linked here).  Despite universally positive feedback about those culinary diversions, this blogpost will simply report other Food and Drug Administration (FDA) compliance developments reported at the conference, supplemented by statistics identified by independent snooping. FDA officials at the conference said that they believe that the reduced number of FDA foreign inspections is partially due to the government shutdown last year, but also increased FDA recognition of inspections performed by foreign inspectorates under the Mutual Recognition Agreement, the subject of many blogposts, the most recent being here.  Relying on inspections by European equivalents of FDA reduces the need for FDA to duplicate those inspections.

We have noticed that a lot of the GMP Warning Letters from CDER emanate from inspections FDA conducted in China and India, so we performed further analysis.  Over the last nine years, selected types of drug inspections in India and China showed a higher rate of classifications of Official Action Indicated (OAI; which result in enforcement actions) and Voluntary Action Indicated (VAI; meaning that there are significant corrections that inspected facilities are required to perform) than do FDA inspections of facilities in the United States.  Significantly, looking at the most serious classification of inspections (OAI), the percentage of inspections in China and in India over the last nine years that were classified OAI was 12%, whereas the comparable number in the United States was 8%.

As for devices, the number of FDA inspections of medical device manufacturing facilities outside the United States increased by 243 percent from 2007 to 2017, according to Sean Boyd, Director of the Office of Regulatory Programs within the Office of Product Evaluation Quality at FDA’s Center for Devices and Radiological Health.  These figures are borne out by manipulating the publicly available inspection database from FDA which can be found here.  While the numbers don’t line up exactly with Capt. Boyd’s (some types of device inspections were not included on the database available on FDA’s website), the database shows 245 FDA foreign inspections of device establishments in fiscal year 2009 and 614 in fiscal year 2017.  The number of such inspections actually dropped off slightly in fiscal year 2018.  See chart below: Also on the device side, in response to a question, Capt. Boyd reported that he estimated that about 40% of the inspections that FDA conducts at medical device facilities result in delivery of an FDA Form 483 (Report of Observations) relating to Quality System Regulation deviations identified by FDA Investigators.

We could provide some analysis of these data by providing obvious advice to companies operating in India and China and subject to FDA regulation: you can expect increasing rates of FDA inspections and you need to be especially vigilant to avoid Warning Letters, which can lead to crippling Import Alerts.  We could also say that, while all OAI inspections are not created equal, the larger rate of OAI inspections in India and China is more damaging to the recipients of those inspections because it is very easy for FDA to impose Import Alerts on overseas manufacturers shipping drug products into the United States.  But to provide that level of analysis would violate Sgt. Joe Friday’s frequent admonition to provide, “Just the facts, ma’am,” or sir.

Young people who don’t listen to reruns of old radio programs can find further information about the fictional Sgt. Friday and the “Dragnet” radio program here.  He was notorious for, when interviewing women whose narratives began to stray, telling them, “Just the facts, ma’am.”

* Scott and Jasmin are legal assistants who provided research assistance for this blog post.