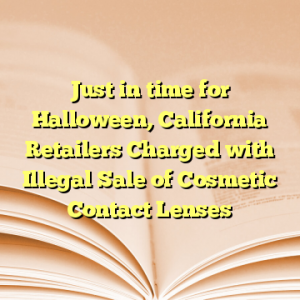 By Douglas B. Farquhar –
Back in the day, there were some freaky-looking cosmetic contact lenses that could make people look like they had the eyes of a wolf, a fish, or an insomniac vampire (excuse the redundancy, please). The costume accessories were especially popular with the frightener, if not the frightened. But, this Halloween, it was the FDA that was striking fear into the hearts of its targets. Four days before Halloween, the U.S. Attorney’s Office for the Central District of California filed misdemeanor criminal charges (here and here) against two retailers, TS Group, Inc. with a “retail location” in Rowland Heights, California, and I-Takashima, Inc., with a “retail location” in Irvine, California. Both were charged with violating the Federal Food, Drug, and Cosmetic Act by holding for sale and then selling cosmetic contact lenses without a prescription, thereby causing the cosmetic contacts, classified as medical devices, to be misbranded (because they do not have adequate directions for use when not sold pursuant to a prescription).
This brought back to mind the issues surrounding cosmetic contacts years ago. Back in the early part of this millennium, arguments were made that cosmetic contact lenses did not fit within the definition of a medical device, because they were not intended to affect the structure or function of the body and were not intended to diagnose, mitigate, cure, prevent, or treat disease. But FDA still sought to regulate them, because, FDA argued, they could cause serious problems to the human eye (infections, scratched corneas, etc.), and, if regular contacts to assist vision were regulated as medical devices, why shouldn’t cosmetic contact lenses? In 2005, Congress voted overwhelmingly to end the debate and to categorize all contact lenses – including cosmetic lenses – as medical devices (Section 520(n) of the FDCA, codified at 21 U.S.C. Section 369j(n)), thereby requiring prescriptions and instituting strict manufacturing standards.
There have since been periodic government reminders and, we believe, other criminal actions. As reported in a blog post so old that the spider webs had to be swept away, we noted that FDA and the Federal Trade Commission issued a guidance document on the subject.
In that guidance, internet purveyors of cosmetic lenses were warned that selling the cosmetic contact lenses without a prescription was illegal. Apparently, not everyone got the message.
No listing on the docket sheet as to how the companies will respond to the charges.