Judicial Efficiency: DEA’s Expanding Use of Summary Dispositions to Narrow the Opportunity for an Administrative Hearing 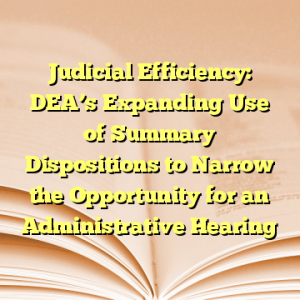 By John A. Gilbert, Jr. & Andrew J. Hull –
There is a long history and established precedent in Drug Enforcement Administration (“DEA”) administrative cases in the use of summary dispositions (i.e., determination without a hearing) related to the loss of state licensing authority (e.g., state medical or controlled substance license) (see our previous post here). In such cases, agency precedent dictates that revocation is required as a matter of law. See Serenity Café, 77 Fed. Reg. 35027, 35027-28 (June 12, 2012).  In other words, because DEA views state licensure of practitioners to be a condition precedent to holding a DEA registration, a registrant without state licensure cannot, as a matter of law, continue to hold a registration. See 21 U.S.C. §§ 802(21), 823(f).
We previously commented on the fact that DEA had recently granted summary disposition in a case, Richard J. Blackburn, D.O., 82 Fed. Reg. 18669 (Apr. 20, 2017), involving, in part, an alleged material falsification of a DEA application for registration (see our previous post here). In our opinion, this was a troubling decision to expand the use of summary dispositions based on a factual issue and not as a matter of law, thus denying the registrant the opportunity to present evidence on the circumstances related to the allegation.
A more recent case, however, extends this trend and includes the apparent establishment of an “egregiousness” standard that DEA may use to justify future summary dispositions and, in the process, deny registrants the due process contemplated under the Controlled Substances Act (“CSA”) and regulations promulgated by DEA.
On October 5, 2017, DEA published a final order by the (now former) Acting Administrator revoking a physician’s registration through summary disposition. In this case, William J. O’Brien, III, D.O., 82 Fed. Reg. 46527 (Oct. 5, 2017), a physician had been convicted of over one hundred felony counts related to controlled substances, including one for distribution of controlled substances resulting in death.  The practitioner was sentenced to a total term of imprisonment of 30 years.  Not surprisingly, the state licensing authority also suspended his medical license (i.e., lack of state authority).
The government sought—and was granted—summary disposition on the lack of state authority. As noted above, this is a well established precedent.  However, the Acting Administrator also upheld the ALJ’s ruling granting the government’s motion for summary disposition on the felony conviction grounds.  In granting summary disposition on the felony conviction grounds, the ALJ noted the recent Blackburn decision in which the Acting Administrator held that the Government was entitled to summary disposition on the grounds of material falsification.
This use of summary disposition based on a felony conviction related to a controlled substance (21 U.S.C. § 824(a)(2))—in our experience— is unprecedented and a trend that could lead to the erosion of the due process rights of DEA registrants and applicants.
The Acting Administrator acknowledged that the use of summary disposition was out of the ordinary:

In contrast to a practitioner’s loss of his state authority, this finding does not mandate the revocation of his registration on this ground [(i.e., felony conviction related to controlled substances)] and the Agency has held that a conviction is not a per se bar to registration (as is the loss of state authority). . . . Here, however, Respondent’s criminal conduct, which involves 120 felony convictions for unlawful distribution, including for unlawful distribution resulting in death, is so obviously egregious that revocation is warranted.

Id. at 46529. The Acting Administrator also admitted that “ordinarily a respondent who has been convicted of a felony subject to section 824(a)(2) is entitled to present a case as to why his registration should not be revoked (or his application denied).” Id.
However, the Acting Administrator appears to have created a new standard in stating that a hearing was unnecessary because the conduct was so “egregious.” While he noted that the practitioner had not alleged “evidence to show why he can be entrusted with a registration nor raised any contention that he acknowledges his misconduct and has undertaken remedial measures,” the physician never had the opportunity to hear or question the government’s case or to present actual evidence in his defense. Id. The bottom line:  DEA (government counsel, ALJ, and Acting Administrator) all agreed that the physician’s criminal convictions were so egregious that a hearing was useless.  In the Agency’s view, there was nothing that the physician could raise in his defense that could persuade the Acting Administrator against revocation.
The problem is that the CSA, DEA regulations, and DEA’s own precedent allow a respondent to rebut the government’s prima facie case by a showing of (1) acceptance of responsibility and (2) remedial actions. See, e.g., Mireille Lalanne, M.D., 78 Fed. Reg. 47750, 47777 (Aug. 6, 2013).  The respondent may also attempt to mitigate the severity of the wrongdoing by providing context, such as ill health or other circumstances.  Most importantly, the CSA states that, prior to revoking a registration based on a violation of 21 U.S.C. 824(a) (including felony conviction related to controlled substances), the Administrator must provide the respondent with an opportunity for a hearing under the Administrative Procedure Act (“APA”). See 21 U.S.C. § 824(a)(c).
DEA’s failure to provide the physician in this case with an opportunity for a hearing to present testimony and/or documentary evidence on the felony conviction grounds (21 U.S.C. § 824(a)(2)) flies in the face of the due process protections afforded to respondents by the APA and CSA. It also deviates from other cases where DEA did afford the respondents the opportunity for a hearing even though they had been convicted of felonies related to controlled substances.  In some of these cases, DEA refused to revoke a registration (or deny an application) in light of the respondent’s remedial case, despite a finding that the respondent has been convicted of a felony related to controlled substances. See, e.g., Kimberly Maloney, N.P., 76 Fed. Reg. 60922, 60922-23 (Sept. 30, 2011) (granting application of physician with felony conviction for obtaining controlled substance by means of forged prescription); Michael S. Moore, M.D., 76 Fed. Reg. 45867, 45867-68 (Aug. 1, 2011) (suspending—not revoking—registration of doctor convicted of felony manufacturing of controlled substance); Mary Thomson, M.D., 65 Fed. Reg. 75969, 75971-52 (Dec. 5, 2000) (continuing registration with restrictions of physician with felony conviction for obtaining controlled substances by fraud); Edson W. Redard, M.D., 65 Fed. Reg. 30616, 30618-19 (May 12, 2000) (continuing registration with restrictions of physician with felony conviction for obtaining controlled substance by fraud).
DEA’s decisions in this case and the Blackburn case reveal a troubling trend.  The Agency has now provided some precedent for obtaining a revocation or application denial through summary disposition based on grounds other than loss of state authority (so far, material falsification and felony conviction)—grounds that are by statute to be reviewed (at the request of the respondent) through the hearing process.  21 U.S.C. § 824(c).  Now it appears DEA may decide that the alleged violations are so “egregious” that it need not provide the required due process rights.  So, for example, DEA could decide that a registrant’s recordkeeping is so deficient on its face and as a matter of law, that the registrant should not be given the opportunity to present evidence in his/her defense or to accept responsibility and demonstrate remedial action.
In conclusion, as required by law and agency precedent, DEA should limit summary dispositions to matters of law with no factual dispute. Otherwise, despite potentially  “egregious” actions, registrants should be provided the due process required under the law, regulations, and agency precedent.