In Menu Labeling Lawsuit, FDA Files Motion to Dismiss, Claiming that Plaintiffs Have No Standing 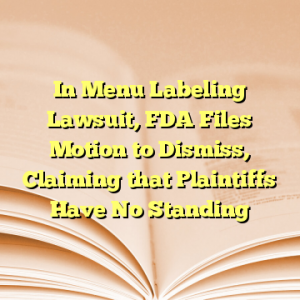 By Riëtte van Laack –
In June 2017, two consumer advocacy organizations, the Center for Science in the Public Interest and the National Consumer League (“Plaintiffs”), sued FDA challenging the Agency’s interim final rule extending the compliance date for menu labeling and request for comments (see our previous post here).  In response, FDA filed a Motion to Dismiss the Complaint because: 1) the Plaintiffs lack standing; and, in the alternative, 2) even if the Plaintiffs have standing, Plaintiffs’ claims are premature and not ripe for review.
FDA argues that the Plaintiffs are not directly affected by the menu labeling rule. As a third party, Plaintiffs must meet a higher burden than a party that is directly affected by the rule, i.e., the regulated industry. FDA provides several arguments to support its claim that the Plaintiffs lack standing. For example, Plaintiffs had asserted an injury to their mission of conducting innovative research and advocacy programs in health and nutrition, and providing consumers with current, useful information about their health and well-being. However, as FDA notes, the menu-labeling rule is not designed to provide consumer advocacy organizations with information. Instead the purpose of the menu labeling is “for consumers to receive [nutritional] information directly from restaurants.” Moreover, FDA’s extension of the compliance date does not affect Plaintiffs’ advocacy work. According to FDA, whatever injuries Plaintiffs claim, they are “unsupported, self-inflicted by Plaintiffs, or dependent on voluntary actions by third parties.”
Even if the Plaintiffs have standing, FDA argues, Plaintiffs claims are not ripe. The interim final rule was just that, an interim rule. It is not a final determination; the decision is “in flux.” In fact, FDA notes that it expressly asked for comments and expressed a willingness to modify the extension of the willingness. Plaintiffs, like any other party, have had an opportunity (which they used) to submit comments. The comment period closed on August 2, 2017, almost two months after Plaintiffs filed their complaint. The Agency asserts that it is actively considering the numerous comments (according to the latest count, more than 71,000 comments were submitted). Since FDA is reviewing the comments and considering future actions, it does not make sense for the Court to take any action, FDA argues, and any determination by the Court on the merits may be “overtaken by the ultimate decision” by FDA.
Since standing must be addressed before the merits, FDA does not address the merits of the Plaintiffs’ complaint.
We look forward to reading Plaintiffs’ response.