Implementation of 340B Final Rule Postponed Until October 1, 2017 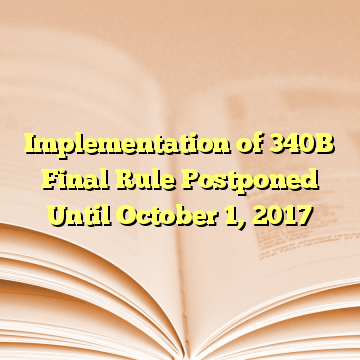 By David C. Gibbons –
Today the Health Resources and Services Administration (“HRSA”), the federal agency responsible for overseeing the 340B Drug Discount Program, published in the Federal Register a rule delaying until October 1, 2017 the implementation of a final regulation establishing the methodology for calculating the 340B ceiling price (including so-called penny pricing) and civil monetary penalties (CMPs) for knowing and intentional overcharges of 340B covered entities.
The history of these regulations is a tortured one. The final regulation in question was published on January 5, 2017 (see our post here) with an effective date of March 6, 2017. On March 6, 2017, HRSA issued a rule delaying implementation to start of the following quarter.  Later, to comply with the new administration’s regulatory freeze memorandum (see our previous post here), HRSA further postponed the effective date until May 22, 2017, and invited comment on whether the effective date should be even further delayed until October 1, 2017 (see also our post here).  HRSA has opted for the latter effective date to implement the ceiling price methodology and CMP regulation, explaining that the delay was “necessary to provide adequate time for compliance and to mitigate implementation concerns.” 82 Fed. Reg. 22893, 22894 (May 19, 2017).